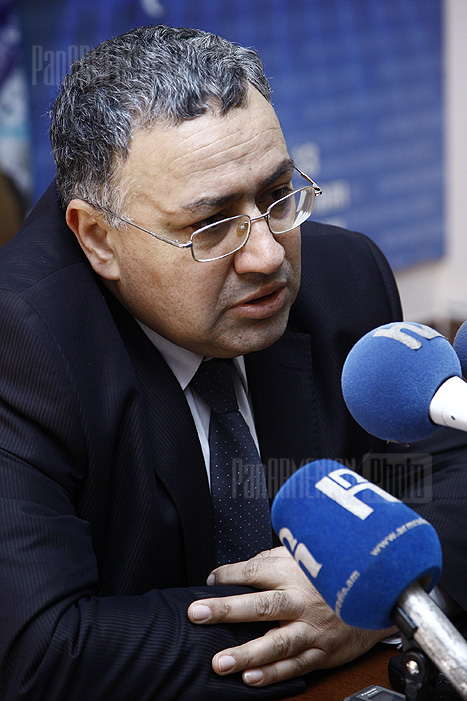 On April 28, an ARF-D delegation comprised of the party’s Supreme Council of Armenia Vice Chairmen Aghvan Vardanyan (2nd place on the list of candidates) and Arsen Hambartsumyan (3rd place on the list of candidates), MP, Artsvik Minasyan and party candidates walked the streets of Avan. The ARF-D members introduced the party’s platform to the local residents and urged them to cast their ballots in favor of the opposition on the May 5 Yerevan municipal election and in particular to vote for ARF-D which is determined to form an alliance of the opposition forces that will be elected. Former ARF-D MP, Artashes Shahbazyan, who is a resident of Avan spoke about the concequences of having a one-party monopoly and how that affects every aspect of the life of Armenians. “On May 5, we’ll go to the polling stations and we’ll say “No” to these consequences, giving our vote to ARF-D” said Shahbazyan.

Rustamyan: We Must Be Freed From The Regime The Soonest Possible

“We see this election as being not only about Yerevan but a serious opportunity to change the fate of our country through an election process. We want to realize radical reforms in the country through this election” said ARF-D Supreme Council of Armenia and Head of the list of candidates, Armen Rustamyan to Aygestan residents, yerkir.am reports. Rustamyan reminded that ARF-D has spoke about those radical reforms with its seven-point platform which was put together ahead of the February 18, presidential election. “The main cause for the situation Armenia is in today, is the fact that the ruling political party has become one with the state. As long as we don’t defeat this cause, our problems won’t be solved. This situation has become dreadful for everyone” he said. “The country has been divided in two. From one side there is a 3-5% of privileged people who have accumulated incalculable wealth and from the other, there is us who are left in the mercy of fate. This is why migration has broken all the records. People tell you, that they are ready to leave the country as soon as they find a way to do that. This is indicative of our crisis. This is the final point and we must change it the earliest possible” Rustamyan stated. In his opinion Yerevan could be totally different had the mayor made use of his rights. But he passed those on to the ruling political party of whom he is a member. If there is no order in the capital then one shouldn’t expect much from the other regions. Having a mayor from the opposition will lead to competitiveness between the political forces who will strive to prove they are better than their counterparts.