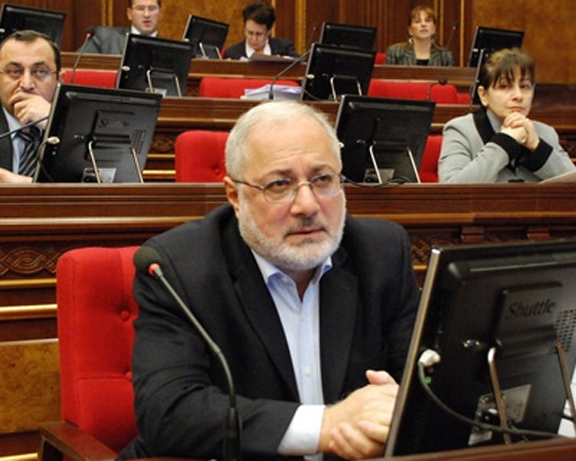 (asbarez.com) – Armenian Revolutionary Federation Bureau member and leader of the party’s parliamentary bloc Vahan Hovannesian on Tuesday confirmed that he has been approached by the Sarkisian Administration to represent Armenia as an ambassador.

In an interview with Yerkir.am Hovanessyan responded to questions, which aimed to quell rampant rumors in the Armenian media, including speculation by some outlets that Hovannesyan’s reported appointment is signaling a shift in the party’s political posturing and its role as an opposition party.

Reports in the Armenian media suggested that Hovannesyan is being eyed for the ambassadorship of Germany. While Hovanessyan did not confirm the destination of his appointment but said, “Yes. I have received an offer to represent Armenia.”

“The offer was made directly to me and not to the Armenian Revolutionary Federation,” explained Hovannesyan, adding that the suggestion does not aim to establish a new agreement with the party, nor does it aim to advance cooperation with the ARF.

“I repeat, the offer has been made to me and I have agreed. Naturally, I have presented this issue to the party, which has also given its blessing,” said Hovanessyan.

The ARF leader said that administration’s offer to him stemmed from his years of experience in foreign policy where he has led the Armenian parliamentary delegation to EuroNest and his current co-chairmanship of the same body. Hovanessyan has also led active roles in Armenia’s delegation to the NATO Partnership for Peace Program and the European Union’s Eastern Partnership Program.

“I would like to stress that during the last three years, given Armenia’s integration talks with Europe, the activities in the sphere of EuroNest have become a daily diplomatic effort,” said Hovannesyan. “Despite the extremely non-conducive environment created by representatives of GUAM countries, our delegation has registered significant successes.”

Hovanessyan also explained that offer is a practical one and does not signal a change in his political views, which have been clearly articulated during his tenure as a member of parliament.

“I am certain the person making this offer is well-aware of my positions and posturing,” said Hovanessyan who called media reports that allege a shift in the ARF’s policy “wrong” and “deliberate, in order to confuse the public.”

Hovannesyan was asked about his and the ARF’s very public disagreements with the administration, specifically as it related to the Armenia-Turkey protocols and the party’s call for Foreign Minister Eduard Nalbandyan’s resignation.

Hovanessyan explained that the disagreements remain not only on the matter of the protocols but also on other fronts, including a proposal to sign a memorandum of understanding on military cooperation between Armenia and the Mountainous Karabakh Republic.

“The work of an ARF leader in the diplomatic arena in no way deters the party,” explained Hovanessyan, adding that the work of a diplomat, under ethical mandates, assumes a level of restrictions, which is very normal.