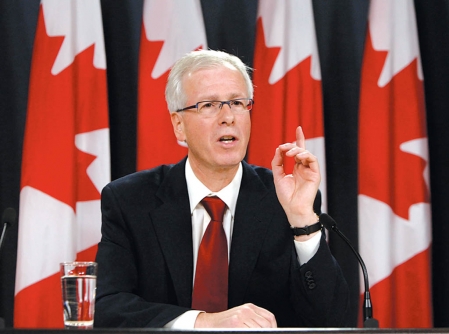 The Honourable Stephane Dion, Member of Parliament for Saint-Laurent –Cartierville and former Leader of the Official Opposition visited the Republic of Armenia and the Nagorno-Karabakh Republic from September 21 to 27, 2013. Mr. Dion’s visit allowed him to view first-hand the progress that Armenia and the Nagorno-Karabakh Republic have made since becoming independent and to share the knowledge gained from his experience as Canadian Minister of the Environment and Minister of Inter-governmental Affairs with the governments of Armenia and Nagorno-Karabakh. Mr. Dion was accompanied on his trip by Dr. Girair Basmajian, chair of the Armenian National Committee of Canada which was instrumental in organizing this fact-finding mission.

Mr. Dion’s trip included meetings with Armenian and NKR parliamentarians, meetings with officials of both countries’ executive branches of government, and visits with Syrian-Armenian refugees that have been recently displaced from their homes due to the internal strife in Syria.

According to official estimates, there are approximately 10,000 Syrian-Armenian refugees living in both the Republic of Armenia and the Nagorno-Karabakh Republic.

During a one-day visit to Stepanakert, the capital of the Nagorno-Karabakh Republic, Mr. Dion met with NKR President Bako Sahakian, and Parlaimentary speaker Ashot Ghulian.

Mr. Dion’s visit coincided with the 22nd anniversary of the independence of the Republic of Armenia and gave him a chance to witness how economic and social conditions have evolved since Armenia regained its independence after 70 years of Soviet rule. Similarly, Mr. Dion was able to view how Nagorno-Karabakh has progressed since its people were able to free themselves from Azerbaijani oppression. On his return to Canada, Mr. Dion has said he will share his observations with his fellow Parliamentarians and provide them with unique insights as someone intimately familiar with the right of self-determination in international law.

“Mr. Dion’s visit to Armenia and Nagorno-Karabakh was an important step in further strengthening the ties between Canada and these new democracies. Mr. Dion is following in the footsteps of the Canadian parliamentary delegation that observed Nagorno-Karabakh’s free and fair elections in 2012 and a separate Canadian parliamentary delegation that attended the inauguration of Armenia’s president earlier this year.” said Dr. Basmajian. “Mr. Dion saw for himself how Nagorno-Karabakh has developed over the last 20 years and the problems caused byAzerbaijan’s aggression and illegal blockade of Armenia. No doubt Mr. Dion’s trip would have been more comfortable if Azerbaijan’s threats to shoot down civilian airliners had not kept Stepanakert’s airport from opening. We can only hope that the next time a Canadian delegation visits Nagorno-Karabakh, the airport will be accepting travellers.”

Dr. Basmajian also hoped that Mr. Dion’s visit would convince Canada and the international community to provide assistance to the over 10,000 Syrian-Armenians who have been displaced by the current situation in Syria and now reside in Armenia and Nagorno-Karabakh. Dr. Basmajian said “The Armenian-Canadian community joins with all Canadians in applauding the Canadian government’s contributions to Syria’s neighbouring countries to assist with caring for the influx of refugees escaping from Syria, but it is important to also assist the government of Armenia in dealing with the substantial costs it has undertaken to care for the Syrian-Armenians who have recently arrived in Armenia. We are confident that once our representatives hear from Mr. Dion about the need for international assistance they will do whatever they can to help.” 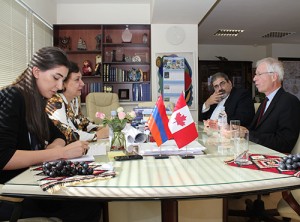 On September 24, Minister of Diaspora Hranush Hakobyan met with Stephane Dion who was accompanied by Giro Manoyan, Head of ARF-D’s International Secretariat.

During the meeting, the minister briefed her interlocutors about the activities carried out by the Ministry of Diaspora and the events that are being organized ahead of the Armenian Genocide Centennial.

(ArmRadio) — Member of the Canadian Parliament Stéphane Dion has arrived in Armenia for a working visit at the initiative of the Armenian National Committee of Canada, the Armenian Embassy in Canada and the Nagorno Karabakh Permanent Representation in the US.

The Canadian member of parliament visited Artsakh, where he had meetings with President Bako Sahakyan and Speaker of Parliament Ashot Ghulyan. On his trip, he also visited Lachin to familiarize himself with the living conditions of Syrian Armenians, who have settled there.

Stéphane Dion’s visit to Artsakh has angered the Azerbaijani Embassy in Canada. Dion says, however, that Azerbaijan’s policy of “blacklisting” foreign citizens visiting Artsakh is absurd. “Before arriving in Armenia, I knew about the Armenian-Azerbaijani issue, but I was not aware of Azerbaijan’s “black list,” which I think is something illogical. I have explained to everyone that my objective was to meet Syrian Armenian refugees. When I say the “black list” is illogical, I mean that it’s illogical to separate the population of a certain area from the rest of mankind,” he said.

Speaking about the Karabakh issue, the Canadian legislator said it should be solved within the framework of the mediation of the OSCE Minsk Group Co-Chairs. “During my meetings with the people and authorities of Artsakh, I understood that they are strong people and are proponents of peace,” he added.

Having met with Syrian Armenians, Stéphane Dion says their living conditions are not that good. “I’m not authorized to assess the policy of the Armenian Government, but one thing is clear – Syrian Armenians face great difficulties, they are short of money and have no proper housing. Many of them are not going to return, aware that the situation in their country will not be solved soon.”

Dion said the Canadian Armenian community is one of the most organized and successful ones. “Armenians are rather successful. They speak Armenian, English, French and are integrated into the life of the country. At the same time, they maintain their cultural roots. To some extent Canada is obliged to help Armenia,” Mr. Dion said, adding that the opening of the Canadian Embassy in Armenia will promote the further deepening of Armenian-Canadian relations.