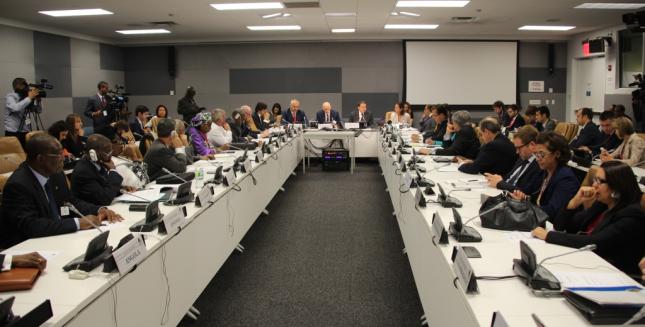 Members of the Socialist International Presidium, heads of state and government from SI member parties, heads of UN agencies and international organisations and a number of foreign ministers gathered at the United Nations headquarters in New York on the 26th September for the 6th annual meeting in conjunction with the UN General Assembly. The meeting was chaired by SI President George Papandreou, with participating members of the Presidium comprising SI Secretary General Luis Ayala, and SI vice-presidents.

The main themes of the meeting were the latest developments in the struggles to gain new democracies in the world, as in Syria and Egypt, with a particular focus on peace, security and human rights; and the social democratic commitment to end poverty and to establish equality.

During the discussion about the Syrian crisis, ARF-D representative, Mario Nalbandian spoke about the problems of the Syrian Armenians. He emphasized on the necessity of making the international aid feasible to all the segments of the population. Nalbandian noted minorities’s issues and in the case of the Syrian Armenian community he spoke about the need of providing international assistance to support the educational system. As for the neighboring countries, Nalbandian made a special reference to Turkey and to the artificially created difficulties the latter poses occasionally to Syrian Armenians at the check points.

The SI President also addressed the humanitarian needs of the Syrian Armenians. 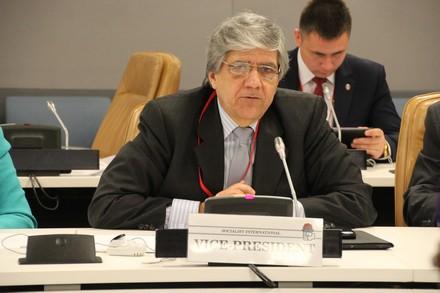 Mario Nalbandian also talked about the relations of EU’s Eastern Partnership countries with the (Eurasian) Customs Union. The ARF-D Bureau member pointed out that in the case of Armenia joining the Customs Union one should consider that the European Union hasn’t made major investments in the country and hasn’t contributed in the creation of new job positions. At the same time, Armenia is ready to continue deepening its political and social relations with the EU.

The Presidium decided that the next SI Council meeting would take place in Istanbul on 11-12 November 2013, hosted by the Republican People’s Party (CHP), with special emphasis on current crises related to the struggles for democracy, particularly in the Middle East and North Africa, and conflicts threatening peace and security. It will equally include discussions to reaffirm the centre-left vision for the global economy with an emphasis on growth, jobs and equality, and for a new development agenda.

The Socialist International is the worldwide organization of social democratic, socialist and labor parties. It currently brings together 170 political parties and organizations from almost 140 countries.
In 2003, ARF-D was the first one among CIS political parties, to hold a SI full membership status.
ARF-D Bureau member, Mario Nalbandian serves as SI Vice-President while ARF-D Bureau member Vahan Hovhannesyan is Co-Chairman of the Committee for the CIS, the Caucasus and the Black Sea. ARF-D is also a member of the Statutory Committee on Finance and Administration of the SI.
The ARF-D Women’s Group is a full member of the SIW (Socialist International Women). The youth organization of the ARF-D, the Armenian Youth Federation, is a full member of the IUSY (International Union of Socialist Youth).