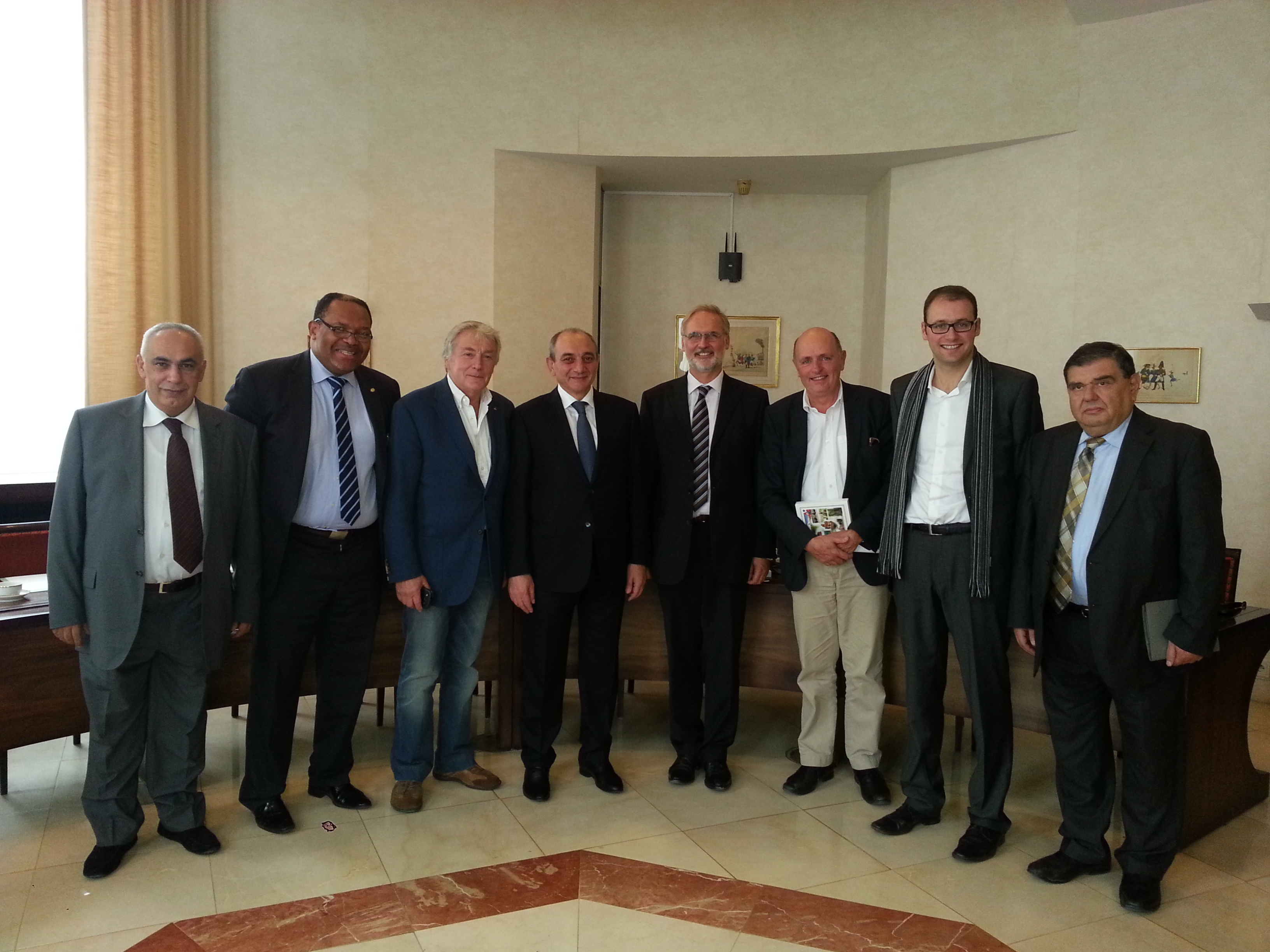 On October 16, Mountainous Karabakh (Artsakh) Republic President, Bako Sahakyan, Vice Prime Minister Artur Aghabekyan, Foreign Affairs Minister, Karen Mirzoyan, Press secretary of the President, Davit Babayan other MKR officials met with Belgian senators, at the country’s Senate to discuss about Artsakh and to present them Artsakh’s positions.
The Belgian delegation, under senator André du Bus de Warnaffe welcomed warmly the delegation from Artsakh. During the meeting the possibilities of assisting Artsakh and deepening the cooperation between the two sides were examined.
Present at the meeting were also Head of Permanent Mission, Ambassador Avet Adonts, Armenian Embassy Advisor, Vardan Barseghyan, Saint-Josse-ten-Noode Community Council member, Serob Muradyan, ANC Belgium representative, Peter Petrossian and EAFJD President Kaspar Karampetian who pointed out that similar visits will keep on being scheduled both on a European and on a national parliaments’ level. “We are always ready to put our acquaintances and levers in use -in this case it’s the Belgium Senate- for the benefit of our homeland and especially for Artsakh. During the historical visit of the President of Artsakh to Brussels we put all our potential at the disposal of Artsakh’s delegation since the Armenian National Committees and their offices have worked and keep on working in the interest of both our states towards their strengthening and capacity building”. 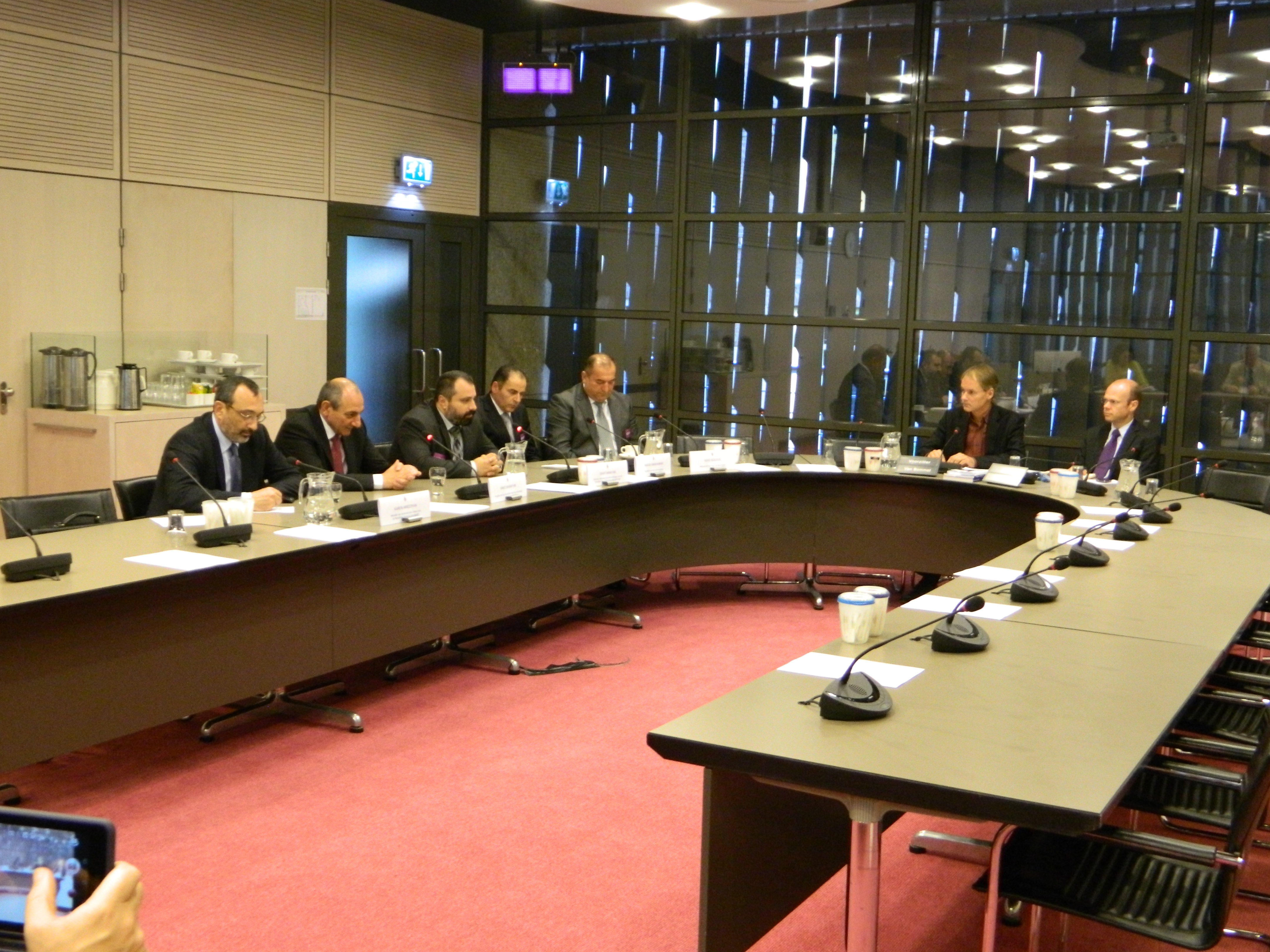 On the occasion of Artsakh leadership’s visit to Brussels for the 3rd European Armenian Convention organized by the EAFJD, the Armenian National Committee of the Netherlands had asked for an appointment with the Foreign Affairs Committee of the Dutch Parliament.
Upon the positive response of the Committee, a meeting was held on October 17, in the Hague between the members of the Foreign Affairs Committee and a delegation comprised of the leadership of Artsakh and of ANC the Netherlands members. Chairing the meeting was Harry Van Bommel, MP. The Armenian delegation included Mountainous Karabakh (Artsakh) Republic President, Bako Sahakyan, Vice Prime Minister Artur Aghabekyan, Foreign Affairs Minister, Karen Mirzoyan, Press secretary of the President, Davit Babayan, ANC of the Netherlands President, Masis Aprahamyan and ARF-D representative Azad Boghosian.
The meeting was cordial and constructive. President Sahakyan presented the current situation in Artsakh and replied to Van Bommel’s numerous questions. The discussion evolved mainly around the issue of the necessity of Artsakh Republic’s international recognition and of the protection of the lawful rights of the people of Artsakh. In particular, it was mentioned that although Artsakh is not recognized internationally its people have made steady steps towards creating a democratic state. The perseverance of Artsakh’s people to the European values and the creation of a state of law were also touched. President Sahakyan invited Harry Van Bommel and the other Dutch officials to visit Artsakh so to be persuaded on their own  Artsakh delegation’s presentation.
Harry Van Bommel thanked the delegation from Artsakh, promised to let all his colleagues know about this meeting and expressed his hope that he visits Artsakh one day. At the same time, he stated that he will exchange information about Artsakh Republic through the ANC of the Netherlands. The meeting ended with warm handshakes and a group photo of the delegations.

ANC of the Netherlands