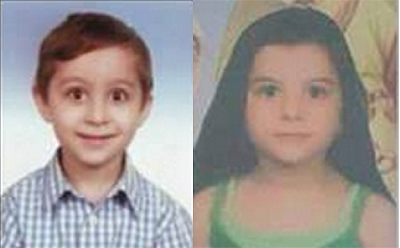 (armenianweekly.com) DAMASCUS, Syria — In recent weeks the Syrian conflict has claimed a number of Armenian victims, including two children, whose loss has shocked the community.

On Nov. 11, as students were released from the Holy Translators Armenian National School (Azgayin Surb Targmanjats Jemaran) in the Bab Tuma district, a mortar fell by the main gate of the school, while two other mortars fell on the school buses parked by the gate, reported Perio News. Around a dozen people were injured and five were killed. Two Armenian students were among those killed: first grader Hovhannes Atokanian, and third grader Vanessa Mikho Bedros. Their funerals took place on Nov. 13, at the St. Sarkis Armenian Church, which stands steps from the school.

Catholicos of All Armenians His Holiness Karekin II condemned the attack, adding that the Christian community of Syria was being targeted. He offered condolences to the families of the victims. On Nov. 17, a requiem service was held at the Mother Cathedral of Holy Etchmiadzin for the souls of the victims. During the service, Archbishop Voskan Kalpakian harshly condemned the inhuman act, adding that killing innocent children is the greatest crime of all.

Assistant regional secretary of the Syrian branch of the Ba’ath Arab Socialist Party Hilal Hilal reportedly visited the Armenian Apostolic Church in Damascus and offered condolences to the families of the victims. The Ba’ath Party is the ruling party in Syria; the regional secretary is President Bashar al-Assad.

According to news reports, On the same day the Armenian school was targeted, a round of mortar fire struck another Christian school in Damascus, the St. John of Damascus, claiming a life, and leaving over a dozen injured.

On Nov. 12 and 13, two buses traveling from Beirut to Aleppo were stopped by armed men before crossing the Syrian border. The passengers—the majority of whom were Armenian—were robbed at gunpoint.

On Nov. 14, another Armenian, 47-year-old Kevork Boghosian, was reportedly killed when a mortar fell near a bakery in the center of Aleppo. This came a day after five Armenians were injured following heavy mortar attacks on the Villaner neighborhood of Aleppo, and another Armenian was injured and the Armenian Paros School (adjacent to the Armenian Catholic Church) was harmed in the Bab Tuma neighborhood of Damascus.

Meanwhile, Armenians serving in the Syrian Army also continue to be threatened.  On Nov. 18, following a mortar attack by rebel forces on a Syrian Army base, a number of soldiers were wounded, including an Armenian, Papken Baghdadian, who is currently recuperating from his injuries.

Thus far, the Syrian conflict has claimed 65 Armenian lives, including 46 in Aleppo , and has injured around 180 others. Fifteen Armenians serving in the Syrian Army were also killed. Around 110 Armenians have been kidnapped, and two have disappeared without a trace, according to Aztag and iNews.