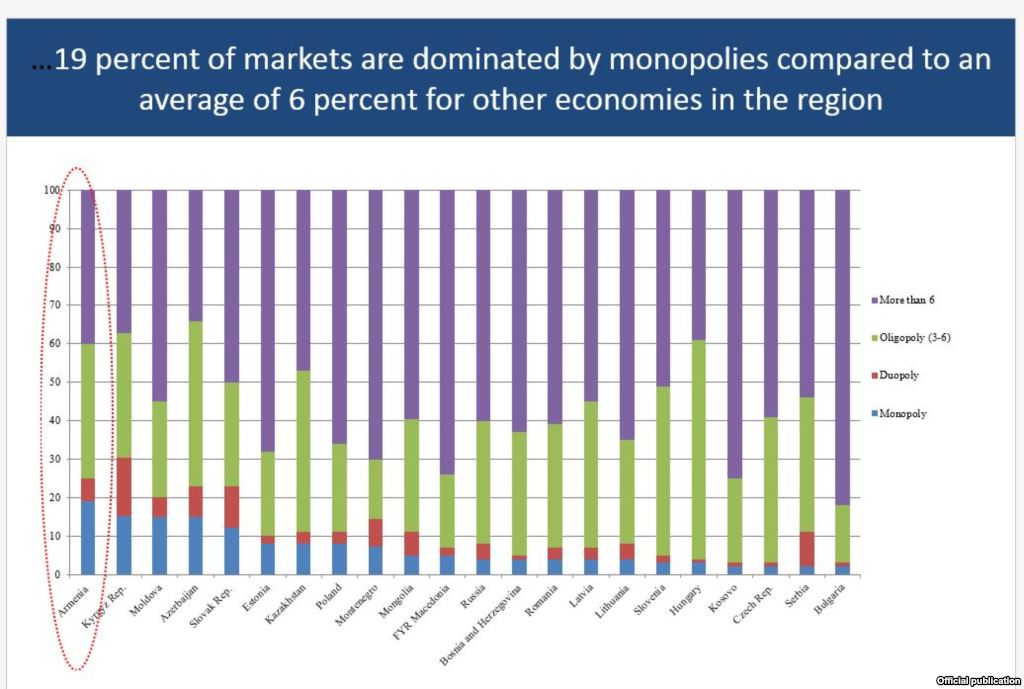 A slide from the “Re-Engineering a New Growth Model for Armenia: Accumulation, Competition and Connectivity” report

(azatutyun.am RFE/RL) — Armenia has the most monopolized economy among former Soviet Union and Eastern European countries, according to a new report released by the World Bank (WB), asbarez.com reports.

The report entitled “Re-Engineering a New Growth Model for Armenia: Accumulation, Competition, and Connectivity” was presented at the WB Yerevan office on Wednesday.

“A limited number of companies are dominant in the main sectors, the share of monopolies and oligopolies in the entire economy remains high,” said World Bank senior economist Gohar Gyulumian.

For several years top government officials in Armenia have declared at the highest level that issues of separating political powers and business and dealing with oligopolies remain among the priorities of the authorities. The latest World Bank report shows, however, that no progress has been made in Armenia in this direction yet.

The World Bank report also calls for a new growth model for job creation in Armenia. It outlines four areas crucial for that purpose, including higher investment and better financial intermediation between savers and investors, private sector-led job creation and improvement of workers’ skills, stronger competitive pressures in the markets for goods and services to improve incentives for companies to innovate, adopt new technologies, and become more efficient.

“Competition is thus of crucial importance for the dynamism of the economy. Pro-competition reforms and effective implementation of antitrust rules can lead to significant productivity gains and consumer savings,” says the report, whose authors also call for enhancing connections of the landlocked Armenian economy with world markets, including through land, air, and through internet and communication technologies, “as that would contribute to efficiency gains and competitiveness.”