Question – About four weeks ago, on the occasion of the anniversary of Hrant Dink’s assassination, PKK leader Abdullah Ocalan’s letter was first published in Istanbul’s “Agos” weekly. So far, the ARF-D has not officially commented on this letter; what is the party’s official position?
HDKh – First, I should say that Ocalan’s letter was published later than expected, presumably because it had to go through the corresponding Turkish state structures. About twenty days before the publication of the letter, Ocalan had announced that on “the day of the anniversary of Hrant’s assassination”—that is January 19— he will send such a letter “directed to our Armenian compatriots.” It was exactly then that Bese Hozat, a co-chair of an organization led by Ocalan, the Kurdistan Communities Union (KCK), had made controversial statements about Armenians. Ocalan, in response to the indignation regarding the statements by Hozat, had announced that he will send a letter to convince the Armenians. However, Ocalan’s letter does not clearly fulfill the required rectification. 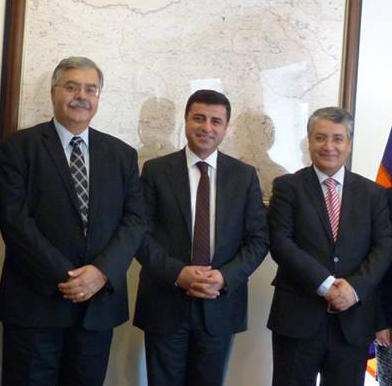 Question – Do you mean to say that you are dissatisfied with the letter?

HDKh – We welcome the fact that the imprisoned leader of the Kurdish people’s liberation struggle, Apo, has sent a letter to the Armenians. The circumstances, in his words “the difficult conditions” in which Ocalan is, should absolutely be taken into consideration and the contents of the letter should be understood and evaluated accordingly. We are glad, that once again, Ocalan gives the Armenian Genocide the proper characterization and considers that the Republic of Turkey will inevitably have to confront this painful history.
What are incomprehensible in Ocalan’s letter are the references to “lobbies” and “cemaat” (communities). In a letter addressed to the Armenians these references at the minimum cause bewilderment: are these references regarding Armenian communities and lobbies in the Diaspora? Especially that Ocalan calls on the Armenian people to “continue its struggle without falling into racist-nationalist traps” and, against all those, “calls for a careful, clear examination of the issue.” There were negative expressions about Armenian lobbies in the Diaspora or in Turkey in Hozat’s comments too, and, about a year ago, in purported comments by Ocalan himself. In the Diaspora, what are called “Armenian lobbies” are the active structures which express the political will of large popular masses of the Armenian people.
I do not comment on evaluations and criticism which appeared in the Armenian media regarding thoughts expressed or not expressed in the letter. Apart from all this, we have strong reservations —to put it mildly— about Apo’s reference to Turkey’s prospect, that it can become “a republic crowned with democracy, which will both come to terms with the past and be a republic in which all different identities will live freely.”
However, I repeat that this appeal by itself, in spite of its shortcomings and contradictory thoughts, is a welcome step which can pave the road to the development of Armenian-Kurdish relations. Of course, those relations should be based also on justice for the Armenian Genocide and the rights of the Armenian people, as assurance to the establishment of real democracy and equal rights.