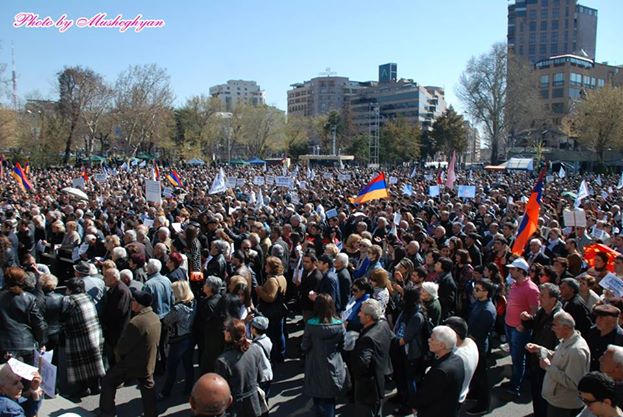 Armenians rallying in Yerevan, on March 22. Photo by Armen Musheghyan

(asbarez.com) YEREVAN (RFE/RL)—Armenia’s four main political parties challenging President Serzh Sarkisian agreed on Tuesday to stage joint rallies later this month in support of a vote of no confidence in the government sought by them in parliament.

Gagik Tsarukian’s Prosperous Armenia Party (BHK) and the three established opposition groups represented in the National Assembly will formally propose the motion of censure on April 28. The parliament controlled by the ruling Republican Party of Armenia (HHK) is due to vote on it two days later. HHK leaders have already made clear that they will reject the measure.

The parliament minority leaders announced after fresh talks that they will heighten pressure on the pro-government majority by jointly holding nonstop demonstrations in Yerevan on April 28-30.

Armen Rustamian, a leader of the opposition Armenian Revolutionary Federation (Dashnaktsutiun), expressed hope that disgruntled Armenians will attend the protests in large numbers. “We believe in the wisdom of our people,” he told reporters. “We hope that they will see an opportunity to solve issues without upheavals and through a normal process. That is what led us to initiate these processes.”

Rustamian said the opposition hopes that the Sarkisian administration will understand that “it’s impossible to carry on like this.” “If they fail to realize that they need to give in, accept criticism, admit that we are really in crisis and listen to their opponents’ views on how to get out of the crisis, then things will return back to normal and this motion of censure will serve its purpose,” he said.

Both Dashnaktsutiun and the BHK have so far been careful not to demand President Serzh Sarkisian’s resignation, unlike the two other, more radical opposition parties, Zharangutyun (Heritage) and the Armenian National Congress (HAK). HAK representatives downplay these differences, saying that the resignation of Prime Minister Tigran Sargsyan and the other cabinet members would pave the way for a “complete regime change” in the country. The four parties have increasingly cooperated in the parliament in the last few months.

The BHK, which boasts the second largest parliamentary faction, has not organized anti-government rallies since pulling out of Armenia’s governing coalition almost two years ago. Tsarukian, who is a wealthy businessman, stepped up his criticism of the government’s economic policies earlier this year.