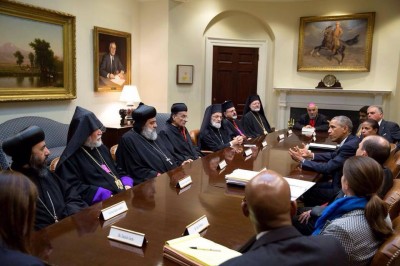 At the request of the patriarchs, Catholicos Aram I spoke, first offering condolences in memory of the victims on the 13th anniversary of the September 11th terrorist attacks in Washington DC and New York. He noted that terrorism, in its different forms and expressions, continues in various corners of the world, and particularly in the Middle East. His Holiness noted that the expanding terrorist movements in the region are not only a threat to Christians, but also to Muslims and the world as a whole. As such, collective and concerted efforts must be made to combat extremism. The participation of Arab and Islamic states in this effort is crucial, noted Catholicos Aram I.

Referring to the Christian presence in the Middle East, His Holiness noted that Christians are not new comers or outsiders to the region, nor should they be considered second class citizens, as their history is deeply rooted in the Middle East. Aram I welcomed President Obama’s announcement just one day earlier and the U.S. commitment to a united effort to eradicate extremist movements.

Following His Holiness Aram I’s remarks, each of the Patriarchs briefly shared their concerns, primarily focusing on the plight of Christian communities in Iraq. Patriarch Rai submitted to President Obama a previously prepared letter by the spiritual leaders.

President Obama, in turn, broadly outlined the key points of his address to the United States, stressing that freedom of conscience and the defense of human rights remain top priorities in United States foreign policy.