(azatutyun.am RFE/RL) The Armenian Revolutionary Federation (Dashnaktsutyun) defended on Friday its readiness to support a radical constitutional reform planned by the authorities and rejected by other major opposition parties. 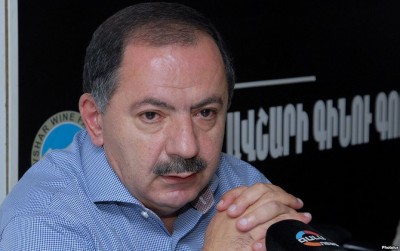 Armenia – Aghvan Vartanian, a leader of the Armenian Revolutionary Federation, at a news conference in Yerevan, 19Sep2014.

Aghvan Vardanyan, a Dashnaktsutyun leader, said Armenia’s transformation into a parliamentary republic would bode well for democratization even if it is aimed at prolonging President Serzh Sargsyan’s rule.

“We consider that scenario likely, and, seeing the authorities’ nature and financial resources, are sure that the authorities have their own calculations,” Vardanyan told a news conference. “That aim cannot be ruled out.”

“But we are saying that if we personalize issues — [speculate about] whether this person will stay on or another will come in — we won’t solve the problem. The problem is not individuals. For me, if another political force wins a majority [in parliament] under the existing [constitutional] system that won’t make any difference.”

Sargsyan and his ruling Republican Party of Armenia (HHK) insist that the main purpose of the constitutional reform is to put in place an effective system of checks and balances through a significant reduction of presidential powers.

Dashnaktsutyun’s opposition allies — the Armenian National Congress (HAK) and the Prosperous Armenia (BHK) and Zharangutyun parties — dismiss these assurances. They say that Sargsyan is simply keen to stay in power as prime minister or parliament speaker because he cannot seek a third presidential term in 2018. The opposition trio is expected to reaffirm this stance at a rally scheduled for October 10.

Vardanyan argued that the opposition should strive instead to prevent the HHK from retaining its parliamentary majority in the next legislative elections due in 2017. He said that could be done through a constitutional clause mandating the conduct of those elections only on a party-list basis.

Dashnaktsutyun has made its endorsement of the constitutional reform contingent on Sargsyan accepting this and several other changes which it will formally put forward next month.

“In case of the changes proposed by us, the possibility of the regime’s reproduction would substantially diminish,” insisted Vardanyan.