(azatutyun.am) The Armenian Revolutionary Federation (Dashnaktsutyun) insisted on Monday that it remains in opposition to President Serzh Sargsyan despite supporting his plans for constitutional reform and refusing to join anti-government protests staged by three other opposition parties. 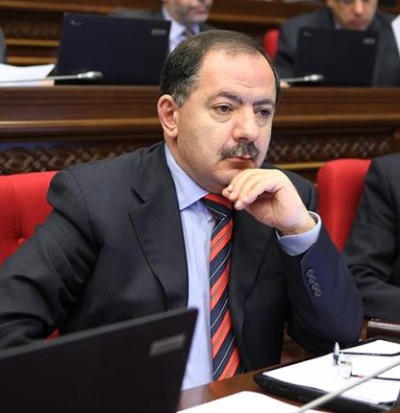 Aghvan Vardanyan, a Dashnaktsutyun leader, stood by his party’s view that Armenia’s transformation into a parliamentary republic, which is apparently sought by Sargsyan, would bode well for democratization.

The other opposition forces represented in the Armenian parliament claim that a switch to the parliamentary form of governance would only enable Sargsyan to stay in power in a different capacity after he completes his second and final presidential term in 2018. The issue was high on the agenda of two big rallies that were held by them in Yerevan last month. Dashnaktsutyun had urged them not speak out against the planned reform.

“We were telling our partners that the four forces can’t hold a rally in which three of them would speak against the fourth one or vice versa,” Vardanyan told RFE/RL’s Armenian service (Azatutyun.am) in an interview. He said Dashnaktsutyun did not join the rallies because the Prosperous Armenia Party, the Armenian National Congress (HAK) and the Zharangutyun Party refused to avoid raising the matter.

Sargsyan effectively suspended the reform process last month in an apparent response to the opposition protests. He said through a spokesman that he will not decide before February whether or not to instruct the commission to start drafting amendments to the Armenian constitution.