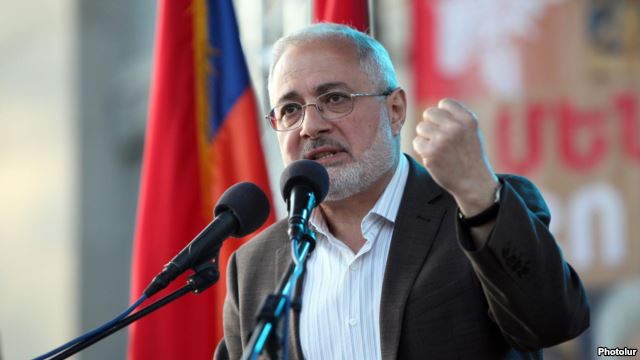 Vahan Hovhannesyan, a long-time leader of the Armenian Revolutionary Federation-Dashnaktsutyun and one of the country’s most prominent post-Soviet politicians, died at the age of 58 early on Sunday, December 28, 2014.

Hovhannesyan, who has also served as Armenia’s ambassador to Germany over the past year, was pronounced dead at a hospital in Berlin where he received treatment for cancer.

The Bureau of the Armenian Revolutionary Federation-Dashnaktsutyun announced the passing on of Vahan Hovhannesyan. The ARF-D Bureau, on behalf of the large ARF-D family, offered its condolences to Hovhannesyan’s family, relatives, comrades and the entire Armenian Nation.

The Armenian government was quick to set up a special commission tasked with organizing his state funeral. The commission headed by Prime Minister Hovik Abrahamyan said on Monday that Hovhannesyan will be laid to rest on January 3.

President Serzh Sargsyan on Monday offered his condolences to Hovhannesyan’s family and paid tribute to the Dashnaktsutyun leader. “It is with deep sadness that I learned about the passing of Vahan Hovannesyan, the Republic of Armenia ambassador to the Federal Republic of Germany,” said Sargsyan.

“Vahan Hovhannesyan’s presence was remarkable both on Armenia’s political arena and during the years of the Artsakh [Nagorno-Karabakh] war and beyond,” added Sargsyan. “It is hard to imagine that his character of an ideological warrior, an educated scholar, a statesman and political figure, a brilliant orator and bright personality will no longer be part of Armenian and pan-Armenian political processes. Vahan Hovhannesyan’s death was a big loss for not only the ARF-Dashnaktsutyun but also all of us,” concluded Sargsyan.

Mountainous Karabakh Republic President Bako Sahakyan also issued an announcement praising Hovhannesyan’s many contributions to Artsakh’s liberation and his commitment to ensure the security and longevity of the Republic.

“Vahan Hovhannesyan’s contribution to the formation of the independent Armenian state and the National Liberation Movement is invaluable. He was a great patriot, prominent political figure, experienced diplomat, a good and kind person who enjoyed great respect in Armenia, Artsakh and the Diaspora,” said Sahakyan.

“The memory of Vahan Hovhannesyan will always remain bright in our heart,” added Sahakyan after offering condolences to Hovhannesyan’s family on behalf of the authorities and people of Artsakh.

Speaker of the National Assembly of the Republic of Armenia, Galust Sahakyan, also expressed his condolences. “I was greatly saddened by the premature death of Vahan Hovhannesyan. Armenia lost a prominent public and political figure, a broad-minded intellectual and a professional diplomat. The loss of Vahan Hovhannesyan the human being, the citizen and the colleague is a great loss for all those who knew him. I express my condolences to Vahan Hovhannesyan’s family, comrades and close ones and share their deep sorrow.” 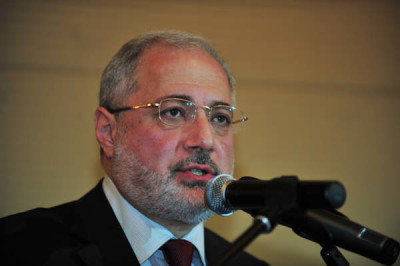 Vahan Hovhannesyan was born on August 16, 1956 in Yerevan.

He graduated with degrees in history and archaeology from the Moscow Pedagogical Institute in 1978 and received his PhD in history. From 1978-1980 he served in the Soviet army.

He was the ARF-D’s vice-presidential candidate for the 1991 Presidential Elections in Armenia.

From 1990 to 1992 he was a member of the ARF-D Central Committee of Armenia, becoming one of the first leaders of the organization in Armenia when it resurfaced during the latter days of the Soviet Union. In 1992 he became a member of the ARF-D Bureau. In 1995 he was arrested after then president Levon Ter-Petrosyan started a campaign of persecution against the ARF-D and shut down the party’s activities in the homeland.

After Ter-Petrosyan’s resignation in 1998, Hovhannesyan served as adviser to Armenia’s new president Robert Kocharian and headed the Commission on issues of Local Self-Government until 1999.

In 1999, he was elected a member of Armenia’s Parliament, becoming chairman of the Parliamentary Committee on Defense and National Security and Internal Affairs, and served until 2003 in the ARF’s parliamentary caucus.

On May 25, 2003 he was reelected by the proportional system from the Armenian Revolutionary Federation-Dashnaktsutyun and elected Vice-President of the National Assembly on June 12.

He was also a member of the Armenian Revolutionary Federation-Dashnaktsutyun Bureau.

He was the ARF’s candidate for the 2008 Presidential Election in Armenia.

In February 2013, at the Socialist International Council meeting in Portugal, he was elected co-chair of the SI Committee for the CIS the Caucasus and the Black Sea.

On Decemer 28, 2013, Hovannesyan was appointed as Armenia’s Ambassador to Germany.

He is survived by his wife, two children and grandchild.

In a private conversation with an RFE/RL correspondent earlier this month, Hovhannesyan spoke of his gratitude to Berlin-based Armenian diplomats, government officials in Yerevan, fellow Dashnaktsutyun members and friends. He said they have supported him throughout his grave illness. The veteran politician also expressed regret at his inability to complete initiatives relating to German-Armenian relations and the 100th anniversary of the Armenian Genocide in Ottoman Turkey to be marked in 2015.