(armenianweekly.com) YEREVAN —The International Union of Socialist Youth (IUSY) World Council unanimously passed a resolution on the 100th anniversary of the Armenian Genocide, condemning the denial of the genocide and demanding justice for the crime. The World Council, which took place in Yerevan and was hosted by the Armenian Youth Federation (AYF) of Armenia, adopted the resolution on May 9.

“The fact that the resolution was unanimously passed speaks measures,” said Nairi Khachatourian, who is in Yerevan representing AYF Eastern United States. “IUSY is sending a strong message to Turkey that true reconciliation between Armenia and Turkey can only be built upon recognition, reparations, and real justice.”

Titled, “An Equal World Is Possible,” the IUSY World Council includes participants from 60 countries, with over 160 delegates representing various socialist youth organizations, in addition to over two dozen AYF representatives from Armenia, Artsakh, and the Diaspora.

Earlier that day, participants of the council paid their respects to the 1.5 million victims of the genocide at the Armenian Genocide Memorial at Dzidernagapert. 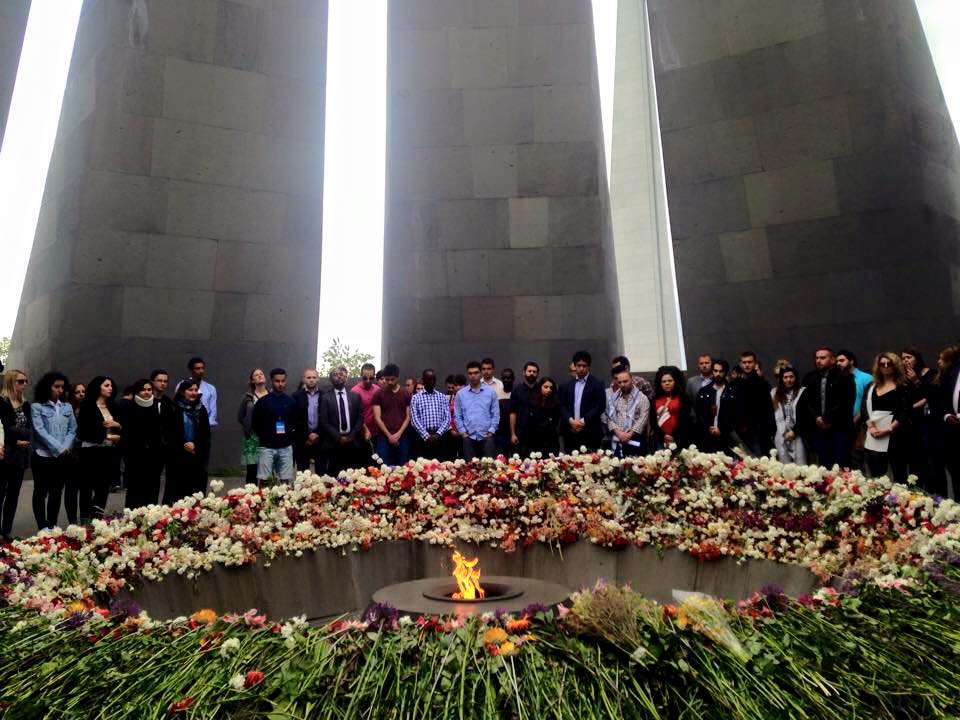 Below is the text of the resolution:

Resolution on the 100th anniversary of the Armenian Genocide

The International Union of Socialist Youth (IUSY), being a faithful follower of the principles of justice, democracy, equality, and human rights, reaffirms its position on the Armenian Genocide as the world commemorates the 100th anniversary of the first Genocide of the 20th century.

The Armenian Genocide opened a whole new circle of genocides that were encouraged by the impunity of the perpetrators of the first genocide as well as inspired by its techniques and genocidal methods.

Genocide is a crime under international law contrary to the spirit and aims of the IUSY. This is why:

IUSY condemns the genocide against the Armenian people which was planned and carried out by the Ottoman Empire and various regimes in Turkey in 1915-23. During these years more than 1.5 million Armenians, living in their ancestral homeland (what is largely known as Eastern Turkey today), were brutally exterminated; their heritage was confiscated and largely destructed. The small number of Armenians who survived was spread all over the world.

IUSY strongly condemns the denial of the Armenian Genocide by the Turkish government as well as all the attempts of the Republic of Turkey to mute and bribe every initiative that is aimed at the recognition and reparation of the Armenian Genocide. IUSY believes that the denial of the genocide is a double crime that ought to be punished and has nothing in common with the right of freedom of expression.

IUSY sees education as one of the most vital and constructive ways of fighting any form of extremism. With this, we call upon our member organizations to spread the knowledge of the Armenian Genocide, because only by knowing and condemning past genocides can we prevent new ones from taking place.