“Equality is not an issue for women, it is an issue for humanity as a whole,” commented SIW Vice-President Diva Gastelum Bajo. 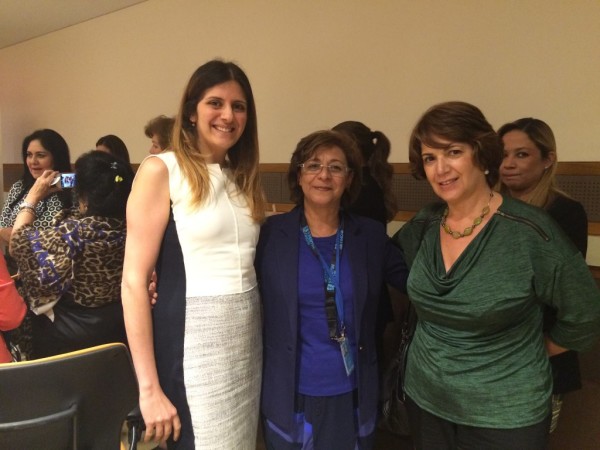 The opening speech delivered by Ouafa Hajji, president of SIW, member of the Political Bureau of the Socialist Union of Popular Forces, Morocco, reflected on the positive outcomes in the struggle to eliminate poverty for women, eradicating violence against women, as well as strengthening women’s education and training development.

Socialist International (SI) Secretary General Luis Ayala commented positively on the work of SIW, and welcomed further discussions and collaborations. His speech—reflecting his remarks during the SI Council the day prior which discussed the Armenian Genocide—mentioned the 100th Anniversary, and efforts under way to organize a hearing or a roundtable discussion with participation from Armenia and Turkey.

Much of the sentiment of the two-day council meeting focused on “Bejing+20” and the future vision of SIW. Various council members, including representatives from Cameroon, Dominican Republic, France, Italy, Mexico, Morocco, Niger, and Turkey, gave speeches reflecting key efforts on what they have done within their own country to fight for parity amongst men and women whether in the workplace, education system, or at home. Many reflected on the historical blueprint—the Beijing Declaration and Platform for Action—that came out of the 1995 conference in Beijing, which has led to a global phenomenon for women being able to exercise their freedoms and choices.

Pia Locatelli, SIW Honorary President (Italian Socialist Party) requested a special discussion and focus post 2015 that will work to eliminate forced marriages for young girls and women under the age of 18. Most of these girls are deprived of their lives, and most of them die at childbirth. They also lead to generations of similar consequence for their daughters.

Karine Shnorhokian and Sandra Vartanian represented the Armenian Revolutionary Federation – Dashnaktsutyun (ARF-D) at the conference. “Attending this conference was truly an experience and opportunity to reflect on what we should be doing for Armenian women not only in Armenia, but throughout the Diaspora,” commented Vartanian. “It is truly extraordinary the dedication and passion these women exhibit; and it is an honor to be amongst them.”

“Our participation in the SIW helps us not only to be in tune with movements aiming to resolve issues facing women worldwide, but also to participate in those movements, because Armenian women, in Armenia and the Diaspora, face similar challenges,” said Armen Rustamyan, political representative of the ARF-D Bureau.

The ARF-D Women’s Group is a member of the SIW (Socialist International Women). The youth organization of the ARF-D, the Armenian Youth Federation, is a full member of the IUSY and YES.