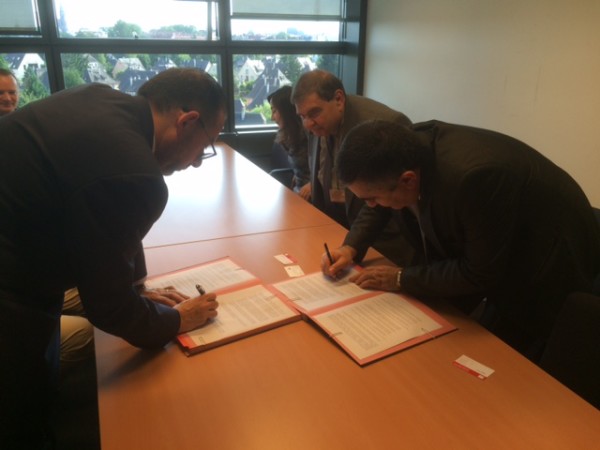 Gianni Pittella, President of the Group of the Progressive Alliance of Socialists and Democrats in the European Parliament (S&D Group) and Armen Rustamyan, Head of the Armenian Revolutionary Federation-Dashnaktsutyun (ARF-D) Parliamentary Faction, signed a memorandum of understanding in Strasbourg, on July 6.
The memorandum reaffirms the principles upon which the parties will cooperate as well as draws on the steps to be taken in that direction.
Following the signature S&D president Gianni Pittella MEP said: “The signature of this memorandum with the Armenian Revolutionary Federation clearly shows that the S&D Group has the political will and the drive to continue establishing closer links with sister parties from countries in the EU’s neighbourhood. I trust that this co-operation, together with the admission of the Armenian Revolutionary Federation as an observer member with the Party of European Socialists (PES), will help to strengthen your opportunities in the upcoming parliamentary elections next year. But I trust above all that we can contribute to consolidating the social-democratic family in Europe, as a credible political alternative and antidote to nationalism, extremism, populism and other trends that weaken democracy. A free, independent, united and – let me add to your motto – a progressive Armenia.”
A similar statement was made by S&D vice-chair for foreign affairs, neighbourhood policy and enlargement, Knut Fleckenstein MEP who stressed in particular the importance of ARF-D in combatting corruption and discrimination, especially at this moment that ARF-D is part of the government.
Head of ARF-D Parliamentary Faction, ARF-D Bureau political representative Armen Rustamyan confirmed the significance of the memorandum both as a means of exchanging experience and as an opportunity to enhance Armenian-European relations as they will be channelled through the cooperation of Armenian and European political parties.
European Armenian Federation for Justice and Democracy (EAFJD) President, Kaspar Karampetian and EU affairs officer, Heghine Evinyan attended the meeting.