(asbarez.com) GLENDALE—With Armenia’s Economy Minister Artsvik Minasyan visiting California to attend several technology and economic gatherings, the ARF-Dashnaktsutiun Western Region Central Committee hosted a reception on June 11 welcoming him to the Southland and bringing together community, organizational and business leaders to discuss prospects for advancing Armenia’s economy and to provide an opportunity to meet the minister.

According to the Master of Ceremonies Saro Nazarian, the main objective of Minasyan’s trip to California is to actively engage the Diaspora in the development and enhancement of Armenia’s economy. These sentiments were echoed by the ARF-D Central Committee chairman Daron Der Khachadourian, who after welcoming the minister, said that it was a unique opportunity to acquaint Minasyan with the diverse Western Region Armenian community, whose potential to have input in economic developments can play a crucial role in strengthening of Armenia’s statehood.

“We hope that our community will vigorously address Armenia’s economic development and will support the advancement of our homeland’s economy, which, in turn, will encourage and give impetus for Armenian citizens to stay in Armenia,” said Der Khachadourian. “Living in the homeland and playing a role in strengthening it are important aspects of realizing our national ideals.” 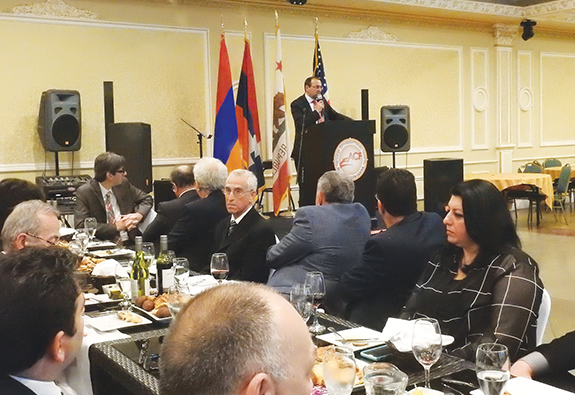 In his address to the gathering, Minasyan said he was proud to be in the largest Armenian community outside of Armenia expressed his conviction that by cultivating our capabilities, together with a strong conviction and hard work, Armenia will become a strong state and strong homeland.

“Currently, Armenia’s economy is not having its best days and this aspect also is reflected in our issues of national security,” said Minasyan. “I am convinced that a state that does not have a developed economy cannot have adequate national security guarantees. Yes. These two aspects are interlinked and we have the imperative to find solutions to both issues simultaneously.”

The minister pointed out that Armenia’s economy faces woes that include a 18.5 percent unemployment rate and a 30 percent poverty rate, which he said requires a policy that develops capital. In that realm, Minasyan said, efforts are underway for judicial reforms to provide more protection to investors and their investments.

He also pointed out that the new Constitution, which was ratified last fall provides guarantees that will foster competition in contrast to monopolies.

“We must reject the development of monopolies and the existing monopolies must be shattered based on existing market norms and approaches. Here, the government has a large role to play by enforcing the laws,” said Minasyan. “The time has come that our so-called oligarchs obey the law.”

On Saturday, June 11 the Armenian American Business Council (AABC) together with the Consulate General of the Republic of Armenia in Los Angeles hosted the Minister of Economy of Armenia, Artsvik Minasyan at the Armenian Society of Los Angeles headquarters.

The Minister was accompanied by his deputy Emil Tarasyan, Head of the Department of International Economic Cooperation Armen Ayvazyan, project manager at the World Bank Financed Trade Promotion and Quality Infrastructure Gegham Gevorgyan, and Executive Director of the Armenia Development Fund Karen Mkrtchyan. Also present were the Deputy Consul General Valery Mkrtoumian of the Consulate General of Armenia in Los Angeles and the Chairman of the ARF-D Western Region, Daron Der Khachadourian.

The event was by invitation and there were over 85 attendees from various sectors of businesses and organizations in the Los Angeles area. The Minister presented his new economic development program, endorsed by the Government of Armenia, their plans to reduce corruption and eliminate monopolies as well as increase trade and commerce, with help from the Diaspora.

he deputy Minister presented details about the advantages of investing in Armenia and the benefits for new startups and businesses. Gegham Gevorgyan presented special programs, which are being co-funded by the World Bank to improve the commercial and business environment of Armenia. Karen Mkrtchyan discussed initiatives directed towards the enhancement of competitiveness in tourism, high technology and education in Armenia.

Several questions were addressed to the minister, which were all answered to the satisfaction of the audience. In addition, some comments regarding the need to help improve the acquisition of visas by citizens of Armenia to travel to the USA were addressed to the delegation, as well as the importance of building up trust between the Diasporan businessmen and our compatriots in Armenia.
A day earlier, Minasyan headed an official government delegation in Silicon Valley and took part in the “Armenia-IT Forum,” this year’s iteration of the annual ArmTech Congress, which was held at the Mountain View, California campus of Synopsys.

While in Silicon Valley, Minasyan’s delegation was hosted by co-founder of Reddit Alexis Ohanian at the company’s headquarters.

“It was an honor to welcome the Armenian Ministers of Economy, and of Labor and Social Protection — amazing things to come!,” said Ohanian in a Facebook/Instagram post.

Between 2008 and 2013 Armenia saw 22% growth in its technology sector year-over-year, and continues to foster startups and talent through education initiatives as well as recently adopted legislation designed to make launching and growing a startup, incubator, accelerator, or research organization much easier.

The main objectives of the Armenian American Business Council are: to develop, promote and facilitate bilateral economic, trade and commercial relations between the United States and Armenia, advance and boost the competitiveness of goods and services of the Republic of Armenia (in the American marketplace, host and promote U.S.-based events, such as trade shows, commercial expos and professional conferences aimed at showcasing goods and services, provide relevant and updated data on investment opportunities by creating and disseminating information through databases and other resources, raise awareness of and facilitate interest in sector-based investment opportunities for American corporations, as well as educate and raise the interest of American companies in the strategically advantageous position of the RoA as a springboard for the export of Armenia-manufactured or assembled products to the region at large.

The Armenian American Business Council is a 501 c (6) non-profit business organization open to all businesses and individuals who are interested in helping the economic development of Armenia. Please visit the AABC website for further details: http://armenianbusinesscouncil.com/ or write to [email protected]