(Armenian Weekly) — In his year-end message to party members, Armenian Revolutionary Federation-Dashnaktsutyun (ARF-D) Bureau representative Hrant Markarian outlined the ARF-D’s three national priorities for the upcoming year: Armenia’s development, a just resolution to the Nagorno-Karabagh (Artsakh/NKR) conflict, and the removal of foreign influence in Armenia. “These three main priorities are not just the priorities of our political party, but of the entire Armenian nation,” said Markarian, who also stressed the importance of Armenia’s 2017 Parliamentary Elections. 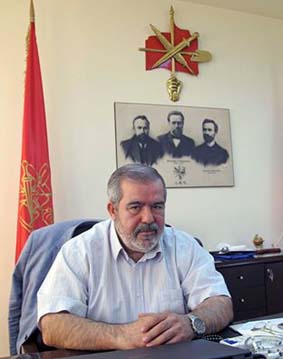 According to Markarian, each agenda item was equally important and without the success of one, it would be impossible to achieve the other two.

In his address, Markarian first discussed establishing an environment in Armenia that fosters economic, political, and cultural development. He added that structural and systemic changes of the government are necessary for Armenia.

“We [ARF-D] laid a foundation for structural change in the new constitution… We will see the effects of these changes following the upcoming elections,” said Markarian. He explained that the ARF has become the force behind this structural change in the government and added that changing the electoral code to provide fair elections is just one of the recent issues the party addressed.

Markarian went on to say that the Karabagh liberation war never been an obstacle that has prevented Armenia’s development. According to Markarian, the “complete liberation” of Artsakh is directly linked to the development and prosperity of Armenia.

Markarian said that some chose to forget about Artsakh rather than working towards overcoming its challenges. “Armenia has many challenges concerning Karabagh, but I believe our biggest is our weakness internally,” said Markarian. “We must have the same drive and motivation in the upcoming elections as we did in our fight for Karabagh because these elections will help determine the future of both Karabagh and Armenia.” Markarian added. He also outlined that the only solution to the conflict is to fight until the Armenian people achieve absolute victory.

Markarian then stated the dangers of foreign influence in Armenia, stressing that other nations should not have the right to intervene in the Armenian people’s decision making, since most nations act based only on their own national interests. “What value do Lachin (Berdzor), Kalbajar (Karvachar), and Zangelan (Kovsakan) have for other nations? They are valuable to us because they are our homeland and our guarantee for security. [Other nations] may be ready to hand those areas to Azerbaijan to gain something in return… They are not to blame for thinking that way. We can only blame ourselves if we allow them to change the conversation,” Markarian said.

According to Markarian, without eliminating foreign influence, Armenia cannot prosper and the Armenian people could eventually lose Artsakh. “Our nation must show that we are capable of governing ourselves, and the challenges we experience are no excuse for other states to intervene,” he said.

Markarian then explained how despite the lack of representation in Armenian governments in the past, the ARF-D has played a crucial role in the development of country. He also stated that things will change and have a greater effect if the ARF is able to get more votes and representation.

“We [the ARF-D] must achieve successful results for the upcoming elections in order to ensure the greatest conditions for the development of Artsakh and Armenia, our homeland, and our people,” concluded Markarian.