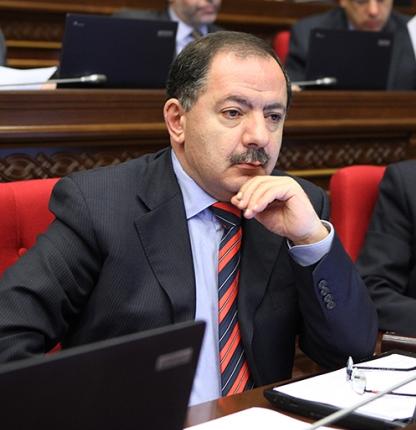 The Secretary of ARF-D Parliamentary faction and Chairman of the party’s Supreme Body of Armenia, Aghvan Vardanyan held a press conference and as it is customary he offered a summary of 2016 from the ARF-D point of view, reported yerkir.am. Vardanyan said that it has been a starting point in some levels considering that the year began with a new system of governance under a new Constitution which gave the opportunity for systemic changes. Futhermore, in 2016 the newly adopted Electoral Code energised the political arena.

Whether being aware of the new Electoral Code, or not, people see that now, there is an opportunity to change thing in Armenia through elections, explained Vardanyan. There were political figures that said they would take part in elections if the Code provided the opportunity for change. “I want to stress that in these two systemic reforms the role of ARF-D has been vital” he underscored.

Referring to the cooperation with the Republican Party, Vardanyan pointed out that Armenia’s domestic and foreign issues are in the core of that agreement. “Many try to blame us, others look for a hidden agenda behind that agreement, but hadn’t we been sure we were putting forward issues that need to be resolved we wouldn’t have proceeded to this cooperation” he said.

The forming of new government gave hope for new approaches and positive expectations. The directives and issues of the political agreement with the Republican party are also included in the plan of the new government, Vardanyan said. Time will tell how much effective the govenrment’s plan will be and if it will have tangible results considering that efforts will have to continue in 2017 which is an election year for Armenia.

In Vardanyan’s opinion 2016 has been a benchmark year for Armenia in terms of the country’s independence since the first 25-year period of statehood maturity has been completed with both its defaults and advantages. “After 25 years of independence we are obliged to enter a new phase and to create the opportunity for that new beginning” he said.

As for the grave events of April and June Vardanyan stated that Azerbaijan’s aggression against the Nagorno Karabakh Republic showed how united and strong-willed Armenians are when it comes to defending their homeland. However, that accumulated energy wasn’t properly guided and so the event of July [police station siege] took place. Vardanyan reminded that shortly after the occupation of the police station it was the ARF-D that before anyone else made a public statement stressing clearly that the use of guns and violence not only is pointless in Armenia, but it must also be condemned. The ARF-D Supreme Body Chairman said that the police station’s siege -whether that was orchestrated by outside forces or not- was a way of breaking the unity that was formed after the April events in Armenia.

2016 has been a starting point for ARF-D as well, said Vardanyan adding that during the last six months 800 people, with 80 per cent of them being of young age, have joined the party. “The coming years will be the period during which the generation of independence will have the opportunity to express itself, and so it is very important for the political arena to proceed to generation change, entrusting the state and the power with the younger one. We have a wonderful youth, with much freer and more independent mentality” said Vardanyan expressing hope that ARF-D’s approach in this issue will impact positevely the political life of Armenia.

In conclusion, Vardanyan underlined that the stronger ARF-D is in the parliament the more effective it can be in securing domestic stability, establishing conditions for real development, guaranteeing the security of Armenia and Artsakh, diminishing foreign interventions and ensuring an equivalent reaction to them.