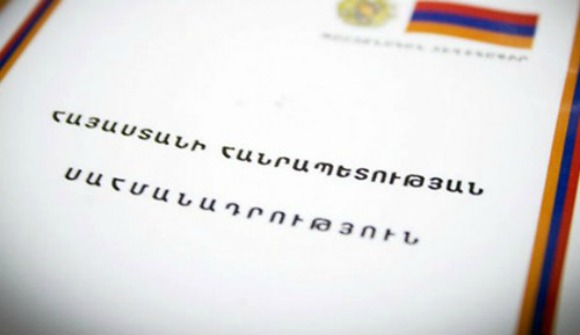 (asbarez.com) Walking around in Armenia and engaging in political conversation with any person of any class, gender, age, and background, one gets the sense that trust in the government is at an ultimate low today. Continuing the conversation and trying to get to the root of the problem, one then comes across the saying “one person controls everything in the country.” Armenians are accustomed to and have accepted that they have a king (takavor) and they must serve their leader for the good of the nation.

The power of the President comes from the Constitution. The first Constitution adopted by the current Republic of Armenia was in 1995. The Armenian National Movement and its leader Levon Ter-Petrosyan, who was the President at the time, was in favor of this Constitution which would set up a semi-presidential system.

The President would receive some extraordinary powers under this constitution. Some of which included the following:

As you can see above, this was the start of a hegemonic structure of governance in Armenia.

So where was the opposition to such a strong Presidential system? Well, the Communist Party of Armenia opposed the constitution and called it a super-strong presidential system. Ruben Akopyan, a member of the ARF-D Central Committee of Armenia at the time, described the constitution as a “constitution of dictatorship.” A bloc was formed with six opposition parties and an alternative constitution was presented that would decentralize power and expand it towards the parliament and local authorities. Of course, with the resources Levon Ter-Petrosyan had at hand, especially with state media, the people of Armenia were told that there would be riots and chaos if the referendum did not pass. The opposition–led by the Armenian Revolutionary Federation-Dashnaktsutyun (ARF-D)–was put in jail and banned from the country just months before the constitutional referendum and parliamentary elections took place. The referendum passed with 70% of the voters voting in favor, and it was officially adopted. A strong opposition voice was then silenced.

With the new constitution, the Parliament would elect a Prime Minister and he or she would be in charge of the government and its various ministries. Now, when people have a complaint about the decisions made by the Prime Minister or the government in general, their voices can be easily heard as their representatives in Parliament have more power now than they did in past years.

With the new constitution, minorities will also be represented in the Armenian Parliament. Although they do not represent a large portion of the population, Armenia took a big step for human rights and included them in the Parliament.

There will still be a President, but the President will hold almost no power at all, it will mostly be for ceremonial purposes and have a one-time seven-year term.

Coalitions are expected to be formed. What does this mean for the regular folks in Armenia? In essence, this means that the political parties in power need to come together and form policies that are going to be beneficial to a larger spectrum of the population. There will be more people from different political parties in different positions of authority, creating a more transparent government. This is likely to increase accountability in government, too.

There were many political parties who were opposed to the last constitutional referendum, but the ARF-D and the Republican Party, through their cooperation, brought forth a new style of government with this change.

With the new constitution, political parties are expected to work together for the advancement of the nation and for the solutions of its problems. Political parties need to find common ground and similarities on different fronts and join forces to solve these issues. The new constitution has paved the way for democracy, equality and justice. Unfortunately, a portion of Armenia still does not know that this is the system that we will have in 2018 when the President finishes his second term.

I wrote this article because it is difficult to try to answer and fit all this in a minute of conversation. With the elections coming up in a few days, it is extremely important for people to be informed. Voting–particularly in the upcoming April 2 parliamentary election–is extremely important.

Do your homework. Look at the biography and history of those asking for your vote. Do your due diligence for your people. Be part of the new system that represents your voice like never before. Be part of the New Beginning.