Special for the Armenian Weekly

In this “BuzzFeed-age” we are all living in, perhaps a list-form article may be an appropriate change in pace from my previous, more exhaustive pieces covering the upcoming Parliamentary Elections in Armenia.

In my latest article on the missing ideological battle, I disclosed my allegiance to the Armenian Revolutionary Federation-Dashnaktsutyun (ARF-D), which is one of nine parties and blocs requesting Armenia’s vote to lead the country for the next five years in the new, all-powerful parliament (National Assembly).

Here are eight reasons why I believe the ARF-D ballot is the one that should make its way into the envelopes of the citizens of Armenia when they enter their polling stations on April 2.

As a partner of the current ruling party in government since 2015, the ARF-D is forced to run on its record in power over the last 14 months. The ARF-D explained its partnership agreement with the Republican Party of Armenia (RPA) as a means to solidify the new Constitution, which switches Armenia from an individual-centric semi-Presidential form of governance to a collective-centric Parliamentary form of governance.

This change has been something the ARF-D has been lobbying for since Armenia gained independence from the Soviet Union in 1991, and is the model under which the ARF-D governed Armenia’s first republic in 1918-1920.

Since joining the RPA in government, the ARF-D has been successful in seeing through these constitutional reforms ahead of the upcoming elections. A new Electoral Code can be singled out as one of the major achievements of this period, which cancels the prospects of vote-rigging at voting stations on election day. The code, adopted with the support of most of the nine parties and blocs participating in the April elections, among other things, ensures:

A party based on the democratic principles of its founders 127 years ago, the ARF has shown it is the torchbearer of democratization in Armenia during its last 14 months in government. Paths towards democratization have been achieved in the three ministries entrusted to ARF members (Education, Regional Development, Nature Protection) during the last 14 months.

Unlike some representatives of parties or blocs, the ARF-D has remained steadfast in its pro-Artsakh position regarding the future of the Republic of Artsakh (Nagorno-Karabagh). While some are pushing the Azerbaijan-endorsed path to peace, which is handing back liberated territories in exchange for “peace” and “maybe some form of autonomy later”, the ARF-D has stated that the rights to self-determination for the Armenians of Artsakh have already been decided by the people of Artsakh. This means that negotiations for the exchange of land are subject to Azerbaijan’s recognition of the Republic of Artsakh.

This video shows the leader of the ARF-D ticket for these elections, Armen Rustamyan, passionately articulating this point:

The ARF-D has managed to have its position on Artsakh regurgitated in most of the policy platforms of the other parties and blocs vying for Armenia’s vote. But it is only the ARF-D, as a democratic party, which can be trusted on Artsakh. The ARF-D is guided by collegiate decisions—usually at the party’s World Congress. And the 32nd ARF-D World Congress in 2015 decided the following: 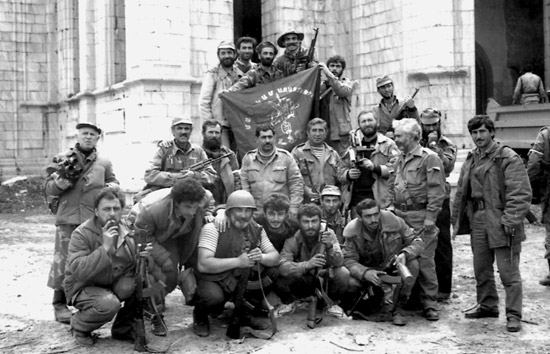 “That Artsakh’s historical borders, including the Azeri-occupied region of northern Artsakh, are considered non-negotiable parts of the Republic of Artsakh.”

This is in black and white, and universally adopted by all ARF-D members around the world.

The ARF-D’s commitment to Artsakh is further proven by its history and present. ARF-D members formed an integral part of the liberation of Artsakh in the early 1990’s, and in April 2016, ARF-D volunteers again made their way to protect our borders when Azerbaijan attacked.

The ARF-D has run an election campaign, based less on promoting their candidates as celebrities, and more on the substance of policies. The integrity of this organization has meant they have used every available minute of air-time to explain the new constitution to the people of Armenia to ensure as many as possible realize the seriousness of what is at stake in these elections.

This classy approach is different to some other parties and participants.

For example, you wouldn’t have seen an ARF-D candidate stoop to lifting elderly supporters, from their coats, onto the stage at election rallies. I can feel you all asking—who would do that? Oligarch Gagik Tsarukyan probably would do that… Wait, he did do that. See below.

Another example, the ARF-D does not simulate applause at their gatherings. Below is a video of the preparations, which includes testing fake applause, at the recent media conference held by Artur Baghdasaryan of the Armenian Renaissance Party.

In a previous article, I have covered the lack of ideology in many of the participating political parties. For example, we have an elderly-lifting oligarch as the head of the Tsarukyan Bloc, who is proposing socialist policies without raising taxes on his wealthy friends to pay for them. And we have the conservative, wealthy-backed RPA calling themselves Njtehagan (after ARF-D socialist hero, Karekin Njteh). 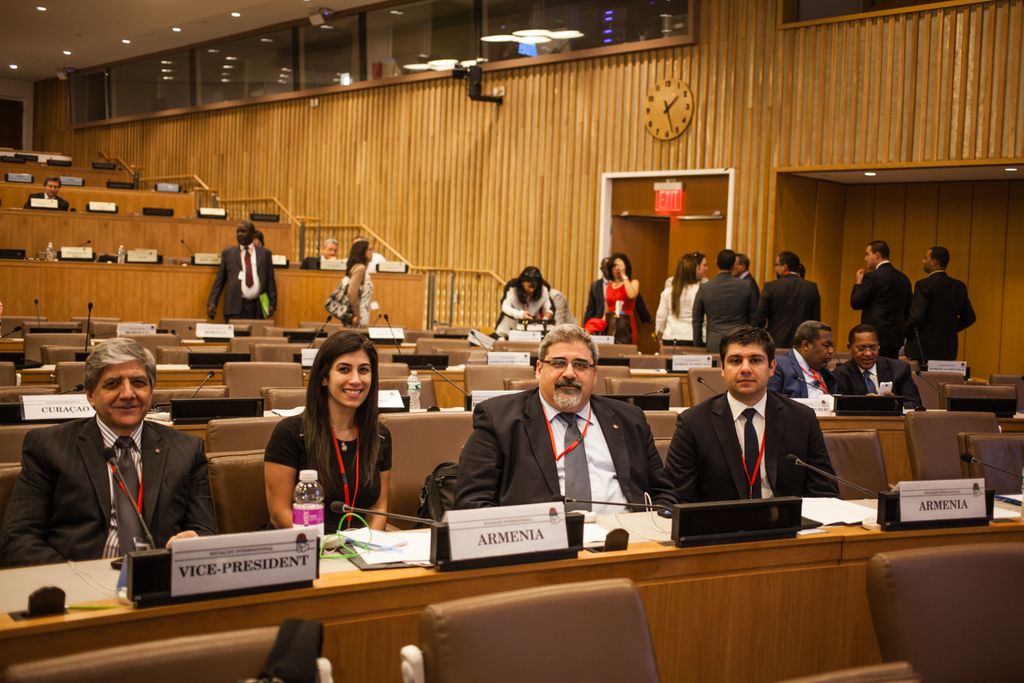 An ARF-D delegation taking part in the Socialist International Council, at the United Nations headquarters in New York, in 2015 (Photo: The Armenian Weekly)

With the ARF-D, what you see is what you get. The party is outwardly socialist and a leading member of the Socialist International.Therefore, when its policy platform says it will increase the minimum wage and aged pensions, you can believe the ARF-D because it has been arguing for the same principles for 127 years. When the ARF-D policy platform says government intervention is needed to reduce the prices of essential services, like electricity and water, you can believe the ARF-D as that is what Socialist political parties have argued everywhere around the world for centuries. When the ARF-D proposes to increase taxes on monopolies benefiting from Armenia’s natural resources, this is because it is what is correct, and what the ARF-D needs to do in order to spread the wealth currently choking a potential Armenian middle-class by oligarchs and monopolies.

Do you trust a policy platform of an oligarch to break up monopolies? Do you trust a leader of a bloc who was benefiting from these monopolies as a Minister who is now refusing to increase taxes on them? Or do you trust your Socialist friend, the ARF-D? The choice is clear.

ARF-D Bureau Chairman, Hrant Markarian articulates the ARF-D difference on the economy below:

The ARF-D has respected the election process. The party has not handed out cash to buy votes, rather they have campaigned to educate voters of the real value of their votes.

While others, well… they’re different. Take the example of RPA candidate, Arakel Movsisyan, who literally made calls to his buddy to asphalt a road for villagers while on the campaign trail. In exchange, he said he expected all votes from the village to be cast to his benefit.

Partly as a result of the Armenian Genocide and Soviet obstructionism for 70 years, the ARF-D has established itself as the leading organized force in the Diaspora. Its members number in the many thousands, and continue to grow.

Its sister organizations like Homenetmen, the Hamazkayin Cultural and Educational Society, and the Armenian Relief Society (ARS), are educating tens of thousands of Armenians in schools, clubs, scouts, sporting teams, and more. They are keeping the Armenian culture alive through dance and song. They have led Diaspora relief efforts for the Republic of Armenia and for struggling Diaspora communities, including for the 1988 earthquake, the Artsakh Wars, and recently for Syrian-Armenians.

The Hai Tad (Armenian Cause) movement is what has kept the fight for justice for the Armenian Genocide alive over more than 100 years. The Armenian Youth Federation (AYF) raises its collective voice for any injustice faced by Armenians—past or present. The ARF-D’s influence and relationships extend into the hallways of parliament buildings, city halls, churches, schools, and Armenian community centers.

The ARF-D has established credibility to lead in the Diaspora, from the Middle East to the United States, from Canada to Europe, from South America to Australia. This credibility derives from the “people first” principles the ARF-D was founded upon. This credibility has been established based on a track record that extends over a century. It is a credibility that Armenia’s next government desperately needs. Who better to increase Diaspora engagement and investment in Armenia than the ARF-D?

The Javakhk region within Georgia’s borders is home to a large Armenian population, who are facing socio-economic, healthcare, cultural, and political issues every single day. There are instances of persecution that are reported, which are not indifferent to the treatment dished out to the Armenians of Karabakh before independence.

The only party or bloc participating in these elections with a Javakhk policy is the ARF-D.

“In order to strengthen the relations between Armenia and Georgia, it is necessary to solve the problems of the Armenians in Georgia and Javakhk,” ARF-D Bureau member Giro Manoyan said after a campaign stop meeting with representatives of the Javakhk-Armenian community.

It is easy to gloss over the ARF-D’s rich history, and some commentary has tried to turn this asset into a weakness for the 127-year-old political party by calling it “old.”

However, the facts are different from this virtual reality. In 1890, the ARF-D was formed and brought together a large number of revolutionary forces to fight Sultan Abdul Hamid, who was butchering Armenians in the Ottoman Empire. The ARF-D took up arms and led uprisings that have directly correlated to us having an Armenia today.

When the Young Turks came into power to overthrow the Sultan, they promised greater rights to Armenians and other minorities in the Ottoman Empire. When it was exposed that the Young Turks would continue on Hamid’s butchering path, they chose to round up ARF-D leaders among the early victims of the Armenian Genocide, knowing that they would not have a clear path to exterminate the Armenian race with the ARF-D always ready to stand up for its people.

In 1918, only three years after the Armenian Genocide began, the ARF-D led the battles of Sardarabad, Ghara Kilise, and Pash Abaran to establish the First Republic of Armenia. In its early years, the ARF-D had donated to its people heroes and intellectuals like Njteh, Dro, Aram, Chavoush, Andranik, Vratsian, Rouben, and countless others.

At the same time, the ARF-D’s Operation Nemesis began what would become a long process of avenging the deaths of the 1.5 million Armenians massacred in the Armenian Genocide. Armen Karo, Soghomon Tehlirian, Arshavir Shiragian, and others planned or executed the perpetrators of the Armenian Genocide, including brutal Ottoman Interior Minister, Talaat Pasha.

During the Soviet years, banished from Soviet Armenia by the Communists in charge, the ARF-D kept alive the red, blue, and orange of Armenia. It kept the fight for justice for the Armenian Genocide alive. It organized the Diaspora in preparation of a future independent Armenia they would need to support.

The earthquake of 1988 and the Artsakh Liberation Movement showed the Armenian world how important this organization would be to the future of the nation. Material and military leadership was provided by the ARF-D, who had instrumental names fight and die to liberate Artsakh, including Tatul Krpeyan, Shahen Meghryan, Viken Zakarian, Mher Choulhadjian, Pegor, and countless others.

The ARF-D’s history shows that the party formed by the people, is always beside the people during their times of need. It is not motivated by money or positions, but by ARF-D’s founding goal of a genuinely Free, Independent and United Armenia.

Armenia heads to the polls on April 2. The ARF-D has promised “A New Beginning, a Just Armenia”.

Trust the ARF-D to deliver, as they have done for 127 years.