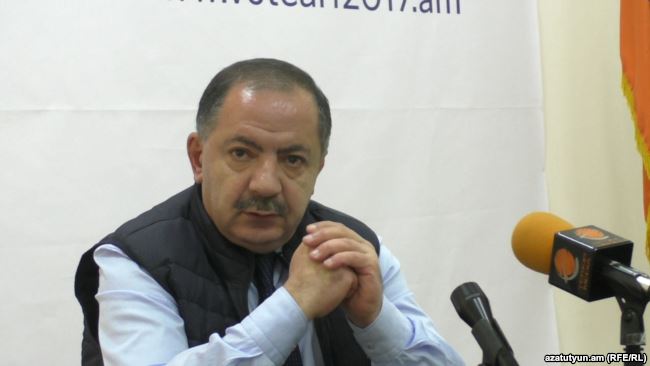 Aghvan Vardanyan, a leader of the party, singled out voting in Chambarak, a small town in the northeastern Gegharkunik province, and some parts of the central Aragatsotn province. He said he appealed to the head of Armenia’s Central Election Commission and Prosecutor-General Artur Davtian.

Vardanyan was particularly concerned about the situation in Chambarak. He claimed that government loyalists forced proxies of Dashnaktsutyun and opposition parties and blocs running in the elections to leave local polling stations.

Vardanyan also reported open voting, a “fairly chaotic situation” and even scuffles in some Aragatsotn villages. He blamed them on a local election candidate of the ruling Republican Party of Armenia (HHK).

An RFE/RL correspondent visited a polling station in Chambarak, witnessing groups of suspicious men standing inside and just outside it. One of those men held a stack of papers which he described as ballot samples. He refused to identify himself and hastily walked away when approached by the reporter.

Another man was writing something in a notebook that seemed to contain the names of voters. He too refused to identify himself or explain his actions.

The chairwoman of the local precinct election commission, Karine Grigorian, denied the presence of any unauthorized personnel there. Still, she told some of those men to leave the polling station moments after noticing the reporter.

Groups of unknown individuals, some of them transporting and guiding voters, were also a fixture outside polling stations across Gyumri, the country’s second largest city. One woman, who is known as a supporter of a local HHK candidate, admitted “bringing people to the elections” when she spoke to RFE/RL’s Armenian service. “And I’m now going to bring in more of them,” she said.

Arus Hovannisian, a Gyumri candidate of Gagik Tsarukian’s bloc, angrily argued with members of a local precinct commission after alleging “carousel voting” by citizens presumably bribed by the HHK. The election officials denied the claims.

Opposition parties and independent election monitors reported hundreds of mostly procedural violations throughout the voting. The vote-monitoring group Citizen Observer said most of the violations witnessed by its activists across the country involved breaches of the secrecy of the ballot and pressure exerted on voters.

In a statement issued two hours before the closure of the polls, Levon Ter-Petrosian’s opposition Congress-HZhK alliance similarly alleged “widespread” open voting. In some cases, it said, election officials or other government backers “stood behind polling booths and watched voters.”

Meanwhile, the Office of the Prosecutor-General said it has looked into more than 1,300 media and opposition reports of irregularities as of 6 p.m. local time and instructed the police and other law-enforcement bodies to investigate 226 of them. It said in most of those cases there was alleged multiple voting, vote buying, open voting, and obstruction of the work of journalists, observers and candidate proxies.

In a separate statement, the prosecutors said they told the Investigative Committee to consider launching criminal proceedings against a village mayor in Gegharkunik who was accused of “guiding” voters and ordering a violent attack on a proxy.