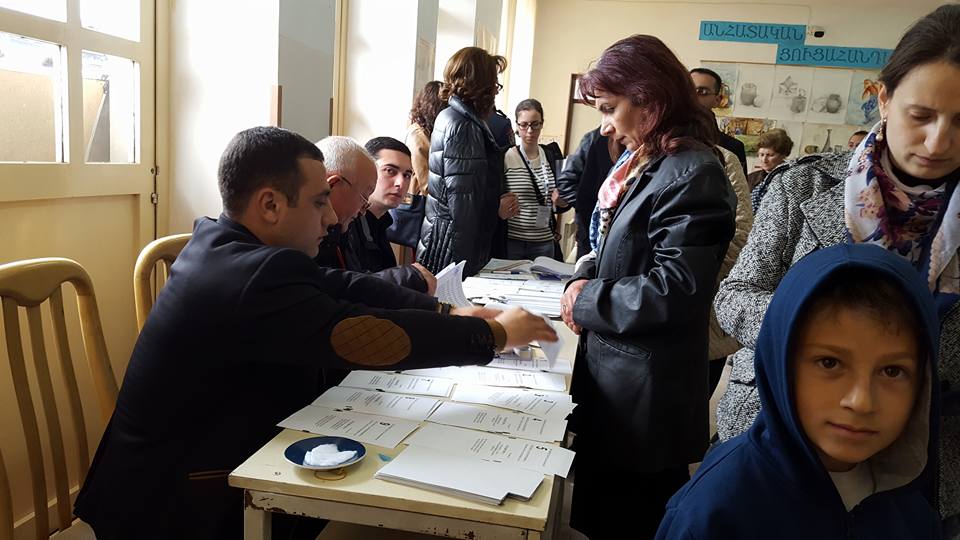 Polls closed at 8 p.m. on April 2 in the Armenia’s first Parliamentary Elections since the adoption of its new Constitution in 2015, with 1,574,947 registered voters (60.86 percent) participating. (Photo: Razmig Sarkissian/The Armenian Weekly)

(armenianweekly.com) YEREVAN—Polls closed at 8 p.m. on April 2, in Armenia’s first Parliamentary Elections since the adoption of its new Constitution in 2015, with 1,574,947 registered voters (60.86 percent) participating. On April 3, at around 12 p.m., the Central Electoral Commission of Armenia (CEC) announced that with around 97 percent of the votes counted, that the ruling Republican Party of Armenia (RPA) had received around 49 percent of the total vote.

An unprecedented 28,000 election observers monitored the election, including about 300 Diaspora Armenians, who partnered with local and international non-government organizations (NGOs).

During the election, biometric machinery was used for the first time, to verify the identities of eligible voters and to register them. Also for the first time, cameras were set up in 1,500 of the 2,009 precincts, to live stream the voting. While these, and other safeguards were put in place for the election, several instances of violations and irregularities, voter-intimidation, and even election-related violence were reported from observers in precincts throughout Armenia.

In one case, an election monitor told the Armenian Weekly about an incident at a polling station in Yerevan’s Arabkir district, in which he was verbally attacked and threatened by the chairperson of the election precinct commission. Another monitor in the Zeitun district said that at least three verbal arguments broke out in the precinct to which she was assigned.

Observers of the Citizen Observer Initiative— a coalition of civic groups that deployed over 3,000 monitors across Armenia—identified about 2,000 violations and irregularities—1,147 of which were registered during the voting process. Meanwhile, observers from the Commonwealth of Independent States (CIS) did not report any violations.

One observer, representing a local NGO and stationed in a precinct in the Zeitun district, told the Armenian Weekly that a voter there had discovered the names of seven unidentified citizens who were registered to vote at his home address. In the same precinct, another voter discovered the name of her deceased mother on the voter list. After the observer inquired with the voter, she said that she had notified the precinct commission about irregularity.

Throughout the day, the Armenian Weekly was also notified about several unknown individuals loitering outside various precincts and observing voters enter and exit polling stations in various Yerevan districts, including Zeitun, Arabkir, Davtashen, and Kentron (downtown) Yerevan. Several instances of more than one person entering the voting booth were also reported.

On the evening of April 2, ARF-D Supreme Council of Armenia representative and ARF-D campaign manager Aghvan Vardanyan told reporters that he had appealed to the CEC and the Prosecutor General of Armenia, accusing RPA members of intimidating voters at precincts in the Gegharkunik and Araghatsotn provinces.

Vardanyan provided details about an incident in the town of Chambarak, where a group of RPA supporters tried to force ARF-D and opposition party/bloc representatives out of some polling stations. Vardanyan also said that a local RPA candidate had incited violence in certain villages in the Aragatsotn province, calling what had occurred a “fairly chaotic situation.”

Earlier on April 2, Sisak Gabrielian, a reporter for RFE/RL’s Armenian service, was physically assaulted by a group of men, said to be affiliated with the ruling RPA. Police in Yerevan confirmed the reports regarding the assault later in the day and announced that they were they are investigating the incident.

“The incident occurred after the journalist, Sisak Gabrielian, noticed that many voters in Yerevan’s Kond neighborhood are visiting a local campaign office of the ruling RPA just before going into a nearby polling station and casting ballots there. Some of them had cash in their hands as they left the office,” read a part of the RFE/RL’s report.

RPA spokesperson and Deputy Speaker of the Parliament Eduard Sharmazanov announced at a late-night news conference that the vote was “democratic, transparent, and competitive.” He also announced that the RPA is ready to extend its cooperation with the ARF-D, but would not be opposed working other potential coalition partners.

The RPA’s total votes may be enough for the party to form an absolute majority in the new Parliament. According to the Electoral Code, if any participating party or bloc achieves a minimum of 54 percent of the vote, they will be eligible to form government in their own right and their chosen individual will become the Prime Minister of Armenia.

Before and during the elections, the RPA leadership repeatedly stated that if the party wins the vote, Prime Minister Karen Karapetian, who was appointed in Sept. 2016, will retain his post at least until President Serge Sarkisian completes his final presidential term in April 2018.