By Haig Kayserian
Special for the Armenian Weekly

The Parliamentary Elections are now over. The results are clear, and four parties and blocs have been elected into the National Assembly of the Republic of Armenia (Parliament). 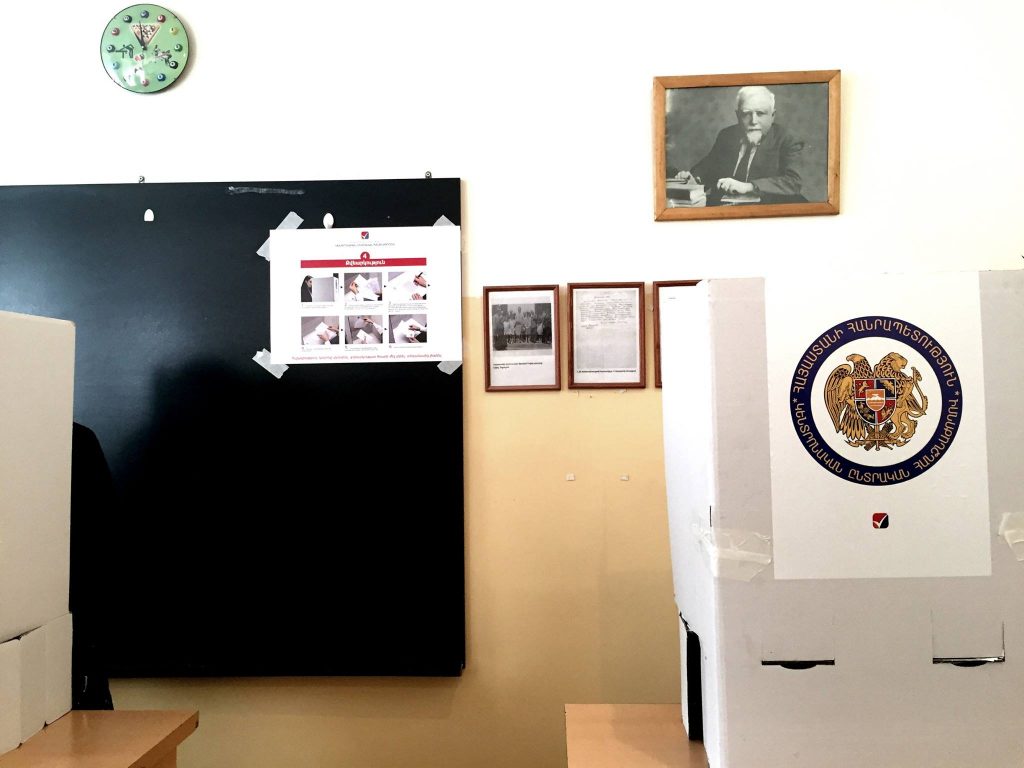 Nikol Aghbalian, Minister of Education and Culture (1919-1920) of the First Republic of Armenia, looks over the ballot boxes at the Yerevan school named in his honor during the 2017 Armenian Parliamentary Elections on April 2. (Photo: The Armenian Weekly)

These include the Republican Party of Armenia (RPA)—which maintains its majority of seats after gaining 49% of the 1.5 million votes that were cast—the Tsarukyan bloc—with just under 28% of the votes—the Yelk bloc—which scored around 7.8%–and the Armenian Revolutionary Federation-Dashnaktsutyun (ARF-D)—which ended up with around 6.6%.

The ARF-D, which was the chief promoter of the move away from a semi-presidential to a parliamentary model of government that Armenia has now adopted, carried the positive and hopeful campaign slogan “A New Beginning, a Just Armenia”.

We do have a “new beginning,” but a “just Armenia” remains a barely visible light at the end of a very long and dark tunnel, guarded by factions of thugs still wielding influence in the RPA and the Tsarukyan bloc.

First, the positive. Here is how Armenia has definitively entered a new beginning:

Despite these positives, which signal several giant leaps towards democratization for Armenia, it must be stated unequivocally that “a new beginning” does not yet mean “a just Armenia,” as evidenced by the unpatriotic slime that still influences the country’s larger parties and institutions.

While many in Armenia welcomed the new laws as an opportunity to cleanse the nation of electoral corruption and towards a return of the people’s true will, the common thugs who have been rigging elections for two decades accepted the new laws as a challenge they should overcome, and once again trample on the will of their people.

There were signs during the campaign. One RPA candidate invited a citizen to his house, having him bashed when he arrived because he indicated he would vote for the ARF-D instead of the RPA on Election Day. The oligarch masquerading as a benevolent candidate for the people, Gagik Tsarukyan thought offering medical care and other direct benefits to citizens attending his campaign rallies does not translate to “vote buying”

Another RPA candidate, being openly filmed, called on a friend to asphalt a village’s main road in exchange for the votes of all villagers. Some teachers and principals were caught trying to round up votes for the RPA from students and families they influence due to their positions of power.

This thuggery was reported, after which the equivalent of “slaps on the wrists” were handed down by authorities… while we all had a few laughs. We laughed because these attempts seemed to be acts of desperation by lone bandits who did not know any better, and could not get to grips with the new laws that were handcuffing their past antics.

After all, the RPA was running in these elections with an enhanced image fashioned by their charming Prime Ministerial candidate, Karen Karapetyan. Many thought that the campaign violators—the basher, the asphalter, the principal—were rogue remnants of the “old RPA,” no longer wielding institutional influence in their own party.

However, these thoughts were proven wrong. Maybe they are not the norm, they may even be rogue, but they definitely wield influence as recent days and weeks have proven.

On Election Day, RPA organizers were delivering elderly constituents to voting stations in the carloads to vote, which led to an unexpectedly high voter turnout. Some were trying to escort these elderly citizens in and join them behind the voting booth. Police, who were empowered by the Electoral Code to disperse all loiterers around voting stations, were largely statuesque, until someone from the media questioned their lack of action. Then they would act. The media became the police.

One voting station had clear vote tampering violations reported by the ARF-D, which were proven to be true thanks to a review of the live footage being recorded at all stations. Subsequently all the results of that voting station were considered null-and-void.

The biggest bombshell hit in recent days, when recordings of phone calls proved without a doubt, that the hugely popular SAS Supermarket chain was engaged in drumming up votes for the RPA. People on the other end of a manager’s calls were being lambasted for not bringing in enough votes, being compared to other employees, who were apparently performing much better.

Let’s take a step back. The Electoral Code did its job. It largely stopped what was policeable by law. Its shortcomings were because, like any law, it entrusts the policing of the laws to police, who were at times questionably lethargic in carrying out their duties during the campaign and on Election Day.

A group of thugs, primarily from the RPA and also from the Tsarukyan bloc, decided they would steal the will of the people by buying or bullying out votes, and perform a highway robbery against democracy. They accepted the new laws only as a challenge to test their criminal might.

We do not know whether the results would have been much different as the same top four will most likely have been reached, but it is safe to assume that the RPA owes its self-governing majority in the new National Assembly to these thieves and their heist of democracy.

One can assume the best case—the best case being that the influence of these traitors of democracy was minimal—that the asphalter, the basher, the entourage of the elderly, the loiterers and the SAS bandits only attracted 5% of the RPA’s 49% of votes.

What would this have meant? If the RPA recorded 5% fewer votes, it would have lost its self-governing majority. It would have been forced to form a genuine Coalition government with another party.

As patriotic Diasporan-Armenians watching from a distance, we sometimes feel like blaming the people who accept bribes and bullying from the likes of the RPA and the Tsaruyan bloc in exchange for their vote. However, it is true that they have never seen their votes lead to change in Armenia. As someone so accurately scribed on their Facebook page recently “…the people need to believe in order to move”.

They have no reason to believe after another election that returned an unpopular party to govern in its own right. The influence of these highway robbers must be reduced in order for the political establishment—well-meaning forces like the ARF-D, like Yelk—to make significant headway, to make the people believe, to force the people to move. The best place for these parties is now in the trenches with the people.

Tsarukyan is Tsarukyan. What you see is what you get. He doesn’t need analysis.

However, the RPA has much to answer for. They were the favorites leading up to these elections, but they were expected to lose their majority and be forced into a genuine Coalition with Tsarukyan or the ARF-D. But their majority has been bought by filth.

It may be true that Karapetyan and the new RPA brigade did not endorse this hijacking of the people’s will, because the advances they have made in the months leading to the elections made Karapetyan the most electable Prime Ministerial candidate among the likely options. However, it is clear that the house-cleaning he had embarked upon has not yet dealt with the filth, which still holds influence in his party.

These allegations cannot be swept under the carpet. The trash must be thrown out for the RPA to be legitimate in leadership. I am certain the ARF-D is pushing this point as they are in discussions with the RPA about extending the “cooperation agreement” between the two parties.

If we were heading towards “a just Armenia,” these would have been negotiations about entering into a genuine Coalition, where the ARF-D’s vote would be a necessity for the RPA, rather than simply desirable.

The elections in Armenia have given us a new beginning, yes. They have also exposed the significant hurdles in the way of achieving a just Armenia.