NEW YORK— An Armenian Revolutionary Federation-Dashnaktsutyun (ARF-D) delegation participated in the meeting of the Socialist International (SI) Council, which took place on July 11-12 at the United Nations headquarters in New York. 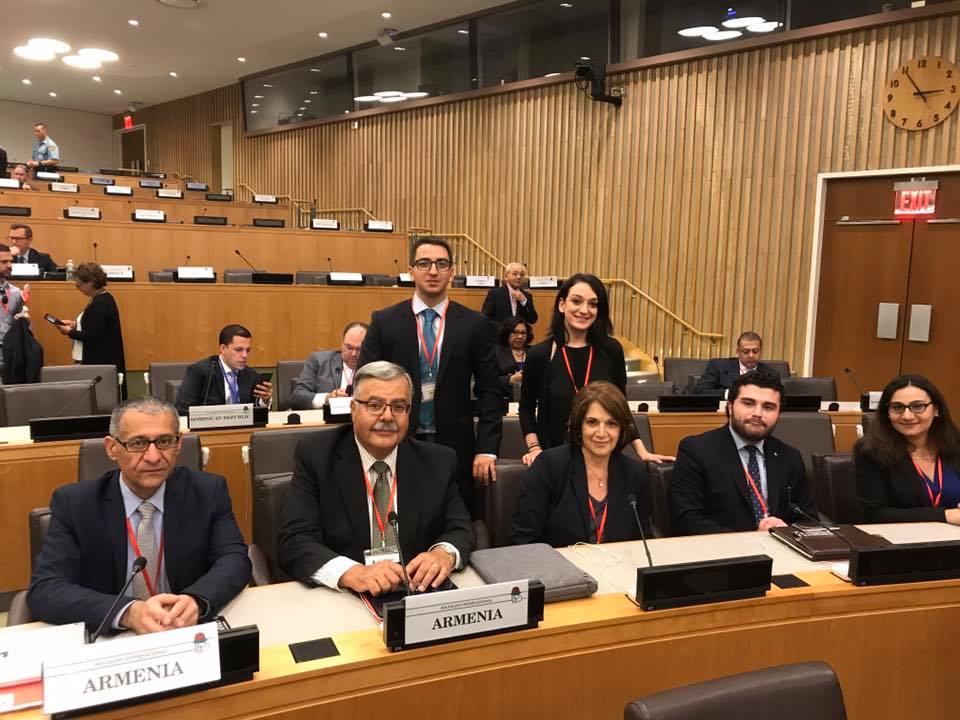 The ARF-D, a full member of SI, participated in the SI Council meeting at the United Nations (UN) in New York with a delegation headed by ARF-D Bureau member and Chairperson of the Armenian National Committee Central Council Hagop Der Khatchadourian. The delegation also included Vahakn Karakashian (Canada), Sandra Vartanian (USA), Maral Choloyan (USA), Sevag Belian (Canada), Hagop Agopian (Canada), and Nare Kupelian (USA). ARF-D member Mario Nalpatian is a Vice President of SI and ARF-D Bureau member Armen Rustamyan is an SI regional committee chairperson.
In his welcoming remarks, the Secretary General of the UN Antonio Guterres discussed the issue of displaced people due to armed conflicts, global terrorism, the crisis regarding climate change, and the challenges facing the youth. He stressed that it is imperative to work to find practical solutions to prevent armed conflicts taking place around the world.
SI president George Papandreou and Secretary General Luis Ayala presented the three main themes of the meeting: strengthening multilateralism for peace; reaffirming social democratic values and policies for the change needed; and defending democracy in places where it is denied or threatened. During his remarks, Ayala also discussed the domestic political situation in Turkey, including the recent crackdown and arrests by authorities following last year’s failed coup.
Umut Oran, representing Turkey’s Republican People’s Party (CHP), said that, to date, Turkish authorities have arrested 50,000 citizens, 164 journalists, 200 members of news agencies, and 12 parliamentarians. He added that human rights, freedom of speech, and democracy are lacking in Turkey. Oran concluded by thanking members of the SI for their support and solidarity.
During the meeting, Araz Alizadeh, a representative of the Social Democratic Party of Azerbaijan, stated that the Armenians of Karabakh (Artsakh) took 20 percent of Azerbaijani land with the help of Russia. He also accused the current and former Presidents of the Republic of Armenia as members of the Karabakh “mafia” and said that in April 2016, Baku only took retaliatory measures against Artsakh’s offensives. According to Alizadeh, Armenian forces killed 30 children in 40 days. He also called on the Organization for Security and Cooperation in Europe (OSCE) Minsk Group to halt its mediation of the conflict and hand the case to the UN.
Following the remarks by the Azerbaijani representative, Secretary General Ayala gave the stage to the head of the ARF-D delegation Der Khatchadourian, who said that he is saddened by Mr. Alizadeh’s emotional outburst, disrespectful tirade and unacceptable remarks. He stated that the Azerbaijani offensive in April of 2016 was a major violation of the ceasefire of 1994 and was a deliberate attempt at raising tensions and instigating war. Der Khatchadourian added that Azerbaijan’s provocations were also a violation of international war laws, especially since innocent civilians were targeted and peaceful Armenian inhabitants living in border areas, including the elderly and children, were ruthlessly massacred. These massacres were reminiscent of the Anti-Armenian pogroms of Baku, Sumgait & Kirovabad in the 1990s, as a result of which official Baku annihilated a considerable percentage of the Armenian population in Azerbaijan and exiled the rest out of the country. He stressed that Karabakh was never part of independent Azerbaijan; it was arbitrarily and unjustifiably carved out of Armenia by Stalin and forcefully placed under Soviet Azerbaijani administration.
Continuing his remarks, Der Khatchadourian said that the Armenian people are familiar with the horrors of war, especially following the Armenian Genocide of 1915-1923 that was orchestrated and implemented by Turkey against its own citizens of Armenian origin. Hence, it is natural for the Armenians of Artsakh—who have also had the bitter taste of persecution and slaughter and have witnessed Azerbaijani murderers revered as heroes and glorified by the Azerbaijan’s leadership —to refuse any subordination to Azerbaijan. He also stated that Karabakh Armenians will never surrender their internationally recognised right to self-determination.

Instead of spreading false information and inciting hatred towards Armenians, Der Khatchadourian then called on the Social Democratic Party of Azerbaijan (SDPA) delegation to urge their government to work towards a peaceful settlement of the Artsakh issue through a civilized dialogue within the OSCE Minsk Group.

He concluded by saying that war should be excluded and the following actions need to be implemented for the settlement process of the conflict: solidify the ceasefire of 1994 and respect the decisions reached by the summits in Vienna and St. Petersburg; stop the constant Azerbaijani ceasefire violations and install verification mechanisms on the Line of Contact (LoC) to determine accurately which side is violating the ceasefire; halt Azerbaijan’s policy of constant obstruction and return to the negotiating table, under the auspices of the OSCE Minsk Group, to arrive at a peaceful solution based on the principles already adopted; and condemn Azerbaijan for and force it to end its barbaric practice of using its civilians as human shields.

On July 14, an ARF-D delegation will participate in the sessions of the Socialist International Women.