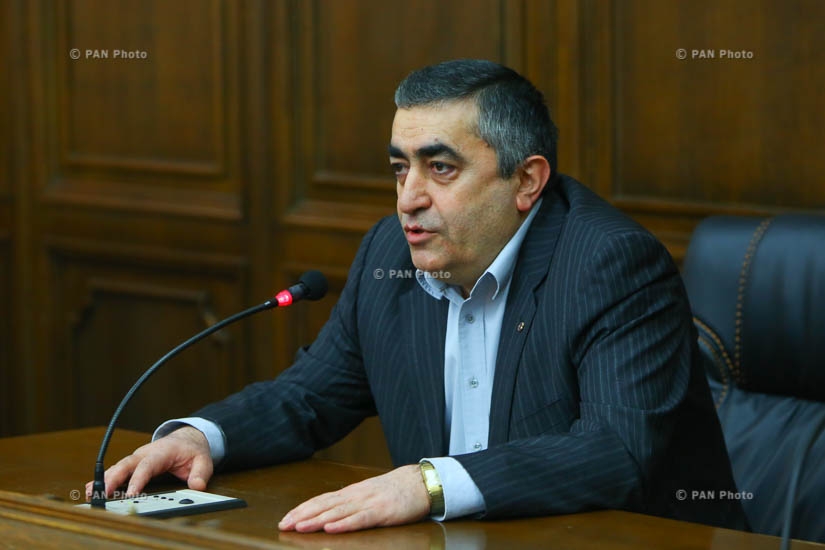 (source: ARKA) A senior member of the Armenian Revolutionary Federation-Dashnaktsutyun (ARF-D) party has commended today the government’s policy saying it is 90% consistent with ARF-D’s vision of how to resolve the country’s major problems. Speaking to reporters, Armen Rustamyan, the head of the ARF-Dashnaktsutyun parliamentary faction, said the government’s activities are on the right track with Prime Minister Karen Karapetyan having breathed new life into the country’s governance system.

“The innovations the government wants to implement require time so that we may feel their results in our life. The pace may be unsatisfactory, but the direction taken by the government is almost 90% consistent with our ideas,” he said. Asked whether this means that the ARF-D considers Karen Karapetyan to be the best candidate for the post of prime minister in 2018 after the incumbent president steps down and Armenia switches to parliamentary republic, Rustamyan said his party prioritizes the successful implementation of the government’s programs.

“Personality for us does not matter,” added Rustamyan.

There are no alternatives to Armenia’s membership in the Russian-led Eurasian Economic Union (EEU) Rustamyan told journalists when asked to comment on a motion by the opposition Yelk bloc demanding that Armenia walks out of EEU.

“The ARF-D endorsed Armenia’s accession to EEU, and the party’s position remains unchanged,” Rustamyan said. According to him, at that time joining EEU was the most correct decision, as evidenced by the challenges which Armenia was forced to overcome in order to protect itself.

Rustamyan stressed that he does not see any other alternative for Armenia today. “We have bilateral relations with Russia, in addition, there is the Collective Security Treaty Organization,” he said.

Rustamyan also argued that as a member of EEU Armenia has a large field of possibilities, which have not yet been used.

“We are to blame for not being able to bring our country’s economy into line with the new situation, and we need to take steps in this direction,” Rustamyan said.