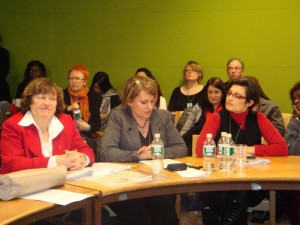 This year marks the 15th anniversary of the Fourth Conference on Women, which took place in Beijing in 1995. The Beijing Declaration and Plan of Action set a new global agenda for the advancement and inclusion of women.

Socialist International Women (SIW), in cooperation with the Greek Mission to the United Nations, organized a parallel event at the Commission on the Status of Women entitled “Beijing +15 What Next?” at the United Nations headquarters in New York City on March 3, 2010.

Socialist International Vice President Maria Titizian (ARF-Dashnaktsutyun, Armenia) was invited to be one of the keynote speakers at the event. (See her speech at the here)

Welcoming remarks were made by Pia Locatelli (Italy), President of SIW and President of the National Council of the Italian Socialist Party and His Excellency Anastassis Mitsialis, Ambassador of Greece to the United Nations. Secretary General of SIW, Marlene Haas (The Netherlends) outlined the mission and areas of work of the SIW. Other speakers included, Vice President of SIW, Antigoni Karali-Dimitriadi (Greece) who is a member of PASOK and serves as the Political Adviser on Gender Equality to Prime Minister George Papandreou and Bibiana Aido, Minister of Equality of Spain.

The Commission on the Status of Women is a functional commission of the United Nations Economic and Social Council (ECOSOC) dedicated exclusively to gender equality and advancement of women. It is the principal global policy-making body. Every year, representatives of Member States gather at United Nations Headquarters in New York to evaluate progress on gender equality, identify challenges, set global standards and formulate concrete policies to promote gender equality and advancement of women worldwide. The Commission was established by ECOSOC resolution 11(II) of 21 June 1946 with the aim to prepare recommendations and reports to the Council on promoting women’s rights in political, economic, civil, social and educational fields. The Commission also makes recommendations to the Council on urgent problems requiring immediate attention in the field of women’s rights.

The Fifty-fourth session of the Commission on the Status of Women (March 1-12, 2010) is being chaired by Armenia’s Ambassador to the United Nations, Garen Nazarian.