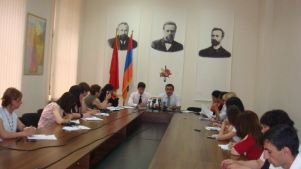 The Supreme Assembly adopted a statement highlighting the party’s priorities in Armenia, namely:
– restoration of the national course [in foreign policy];
– establishment of social justice
– protection of citizens’ rights
– formation of new authorities 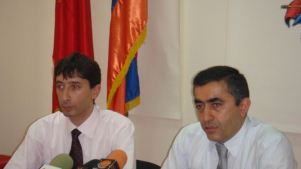 On June 7, during his first press conference following reelection as chairman of the ARF-D Supreme Council of Armenia, Armen Rustamyan did not exclude a social rebellion in Armenia. The party came to the conclusion after receiving numerous complaints from Armenian regions. “We are hopeful that the authorities also receive similar complaints,” Rustamyan told the press conference.

Speaking about the decisions of the Supreme Assembly, Rustamyan said that a change of power is the only way out of the current grave situation in Armenia. “We want to change the government by means of elections. That is the way to go. Regime change through upheavals is always dangerous and harmful, especially given that Armenia and the Armenians now faces an unfinished war,” he said. He also reiterated that during the next presidential election the ARF-D would nominate its own candidate. “If Armenians had elected [ARF-D candidate] Vahan Hovhannisyan president in 2008 we would be living in a different Armenia now,” Armen Rustamyan said.

Rustamyan also refuted speculations in the media that the ARF-D seeks former president Robert Kocharyan’s return to politics. The ARF-D will never be anyone’s party and its mission does not stipulate any person’s return to the political scene. “It is upon Kocharyan to decide his further steps. He is free to do whatever he wants,” Rustamyan said. “Being a Coalition party, we were unable to fulfill our aims and left our programs unfinished during Kocahryan’s tenure of office,” added Rustamyan.
Asked why the ARF does not demand Serzh Sargsyan’s resignation if the party is dissatisfied with his policy, Rustamyan said, “You are right. How long can we give the president new chances? It is enough. We have closed an eye to many things giving him new chances. They need not test ARF-D’s patience and prudence.”

“The ARF gave a mild assessment to the clashes of March 1, 2008. The authorities should know that the main reason for the uprising was the rigged presidential elections,” said Rustamyan.

“The ten victims could have been averted if the opposition had had the rally near the Matenadaran and not by the Statue of Miasnikyan. I am sure that the opposition needed the victims. I think both sides [opposition and authorities] are to blame for the clashes,” he added.

“Obviously, the incumbent Armenian authorities are unable to solve topical problems. The country needs a new regime, which would be capable of resolving problems,” Rustamyan said. In this context, he stated that ARF-Dashnaktsutyun is the only force capable of solving the existing problems. “Time comes when changing the ruling regime becomes a matter of national security,” Rustamyan noted.

He pointed out the explosive situation in Armenia. “Social discontent has never reached such a peak and the social situation has never been so difficult. I hope that the authorities realize it as well,” Rustamyan said. He did not rule out a social upheavle in the country. According to Rustamyan, in Armenia every new election will worsen the situation. “The reason is that the Armenian people have been unable to form power based on free expression of their will for many years,” he stressed. Rustamyan, also chairman of the Armenian parliament’s committee on foreign relations, did not rule out the possibility of pre-term presidential and parliamentary elections. “A force-majeure situation can always arise in a country like ours, and any political force respecting itself must always be prepared for such scenarios,” he said. “During elections the authorities themselves corrupt the people and then they seek great achievements. It is impossible,” Rustamyan added.

The ARF-Dashnaktsutyun statement contains a long of list of socioeconomic and political problems facing Armenia, including a culture of electoral fraud, government abuse and widespread poverty.

“Today the state is not by the citizen’s side,” said Rustamyan. “Unfortunately, we have two types of states. One caters for the interests of a minority, a privileged class, while the other has left its citizens on their own.”

Rustamyan also referred to “disgraceful” verdicts routinely handed down by Armenian courts. “New authorities must be formed in Armenia. These authorities are incapable of solving all these problems. This is already a fact,” he added.

Rustamyan insisted that his party is not responsible for the country’s ills despite having been in government for eleven years. Dashnaktsutyun never had enough powers to remedy them, he said. At the same time he stressed the positive changes that were effected by the Kocharyan administration. Among them are Kocharyan’s foreign policy, the 2006 reform of the Armenian constitution and closer ties with the worldwide Armenian Diaspora.

“Had Dashnaktsutyun not been a part of the government, those issues would definitely not have been solved,” stated Rustamyan.