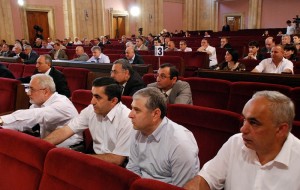 Members of the ARF-D faction in parliament

The Armenian parliament on Thursday passed in the second and final reading a controversial bill which local press freedom groups say will fail to end a strong government influence on the country’s broadcast media.

The final version of the amendments to an Armenian law on television and radio contains the most important of the provisions criticized by local media associations and the Organization for Security and Cooperation in Europe.

In an extraordinary joint statement issued earlier in the day, the Yerevan-based ambassadors of the leading European Union members states effectively echoed the critics’ concerns and urged the Armenian government not to put the amendments to the final vote for now.

“The EU Heads of Mission encourage the government and legislators to continue working closely with civil society, the Council of Europe and the OSCE experts with a view to bring the law further in line with international standards to enhance plurality in the Armenian media and to promote media freedom,” read the statement.

However, the National Assembly dominated by pro-government lawmakers ignored the call and adopted the bill at a late-night emergency session. Only 13 deputies 131-member assembly mainly representing the opposition Dashnaktsutyun and Zharangutyun parties voted against it.

The proposed amendments are meant to regulate Armenia’s ongoing transition to mandatory digital broadcasting, which is due to be completed by July 2013. Media watchdogs and opposition groups say the authorities have initiated the process to prolong their de facto control over virtually all Armenian TV and radio stations.

Government officials assured critics that the bill will undergo significant changes before its final passage as they pushed it through the parliament in the first reading on May 20. They subsequently claimed to have accepted most of the recommendations made by OSCE experts and local watchdogs.

However, the government remained adamant in keeping a clause that would reduce the number of TV and radio operating in Armenia and likely complicate the emergence of new, more independent broadcasters. It also refused to drop another amendment that allows the National Commission on Television and Radio not to explain its decisions to grant or revoke broadcasting licenses.

In a statement issued on June 6, the Yerevan Press Club and three and other media groups expressed their “profound disappointment” with the government’s stance. “The time, the effort and resources spent by our organizations as well as international structures and their experts have not yielded an adequate result,” they said.