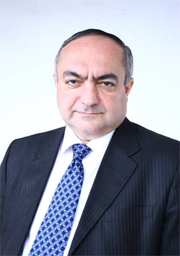 Born in the village of Kagharci in 1963, in the region of Martuni in Mountainous Karabakh, Armen Sargsyan went on to study in Armenia at the Khatchatur Abovyan Pedagogical Institute’s history department.

1985-1993: After receiving his university education he returned to his native village and worked in the local school as vice principal responsible for educational curriculum and director of the school.

1989: He was elected to the National Council of Mountainous Karabakh.

1994-1995: Lecturer at the faculty of history at Mountainous Karabakh’s State University.

1997: Department head of Culture in MKR.

Armen Sargsyan actively participated in the Karabakh Movement; he was the commander of his native village’s self-defence unit; deputy battalion commander.
On June 19, 2005 he was elected to the MKR parliament on the ARF-Movement 88 political coalition’s proportional list. He has been a member of the MKR parliament’s Standing Committee on Social Issues.

On May 23, 2010 he was elected to the MKR parliament for electoral district 11 as a single-seat (majoritarian) mandate.

On June 10, 2010, during the first session of parliament he was elected to chair the MKR parliament’s Standing Committee on Science, Education, Culture, Youth and Sport.

He is a member of the ARF-D. He is the leader of the ARF-D parliamentary faction in the MKR parliament. He has been awarded the “Sirutyan Hamar” (For Love), the Antranik Ozanyan and Marshal Baghramyan medals.

Armen Sargsyan is married and has two children.