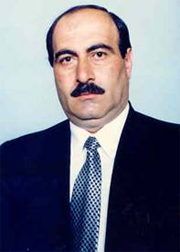 Kamo Barseghyan was born in 1957 in the village of Baluja (Aygestan) in the region of Askeran in Mountainous Karabakh. He went on to study physics at the Physics/Mathematics faculty of the Pedagogical Institute of Stepanakert.

1980-1981: Worked as a dispatcher in the utilities department in the region of Kuybishev in the RSFSR.

1983-1992: Worked at the Stepanakert Shoe Factory as an inspector, later as the president of the labor union.

Kamo Barseghyan was actively involved in the national liberation struggle of the people of Mountainous Karabakh and was a member of the Grung Committee’s “Myacum” (Unity) movement; he fought with Baluja’s volunteer company as deputy commander and later as commander of the company.

On May 23, 2010 he was elected to the MKR parliament, on the ARF-D party’s proportional list.

On June 10, 2010 he was elected as Deputy Chair of the MKR Parliamentary Standing Committee for Production and Production Infrastructure.

He is a member of the ARF-D MKR parliamentary faction.

He is married and has one child.