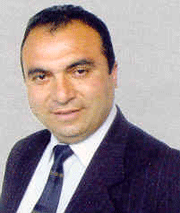 Vahan Badasyan was born in 1968 in the village of Khantsadzor in the region of Hadrut of Mountainous Karabakh. In 2001 he graduated from architecture department of Yerevan’s Karl Marx Polytechnic Institute.

He was an active participant in the struggle for self-defense in Karabakh.

1993: He was appointed commander of the first battalion in the region of Hadrut. He took part in the battles in Martakert, Kelbajar, Fizuli, Jabrayel and other areas.

1994: He was wounded on the battlefield. After being treated, he was appointed to the administrative district of Hadrut as deputy director.

1995: He was appointed acting director of the administrative district of Hadrut and later resigned.

1996-1999: Initiated and completely restored his native village of Khantsadzor, which had been totally destroyed at the beginning of the war.

1999-2001: Worked as director of the administrative district of Hadrut.

2001-Present: He works in agriculture.

On May 23, 2010 was elected to the MKR parliament on the ARF-D party’s proportional list.

He is a member of the MKR Parliamentary Standing Committee for State and Legal Affairs.