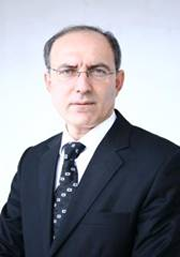 Vahram Balayan was born in 1962 in the village of Kish in the region of Martuni of Mountainous Karabakh. He graduated from the history department of Stepanakert’s Pedagogical Institute in 1983.

1989: Defended his doctoral thesis at the Armenian SSR’s Academy of Arts and Sciences, upon which he was granted the title PhD of History.

1989: He began to lecture at the Kirovakan (Now Vanadzor) Pedagogical Institute’s Stepanakert campus as a history professor.

2008: From August, took on the responsibilities of pro-rector at MKR State University’s scientific research arm.

Vahram Balayan is a member of the Prime Minister of MKR’s commission on science and latest technologies.

He is the author of five studies, dozens of academic articles and co-author of three books.

He is a member of the MKR Parliamentary Standing Committee on Foreign Relations.