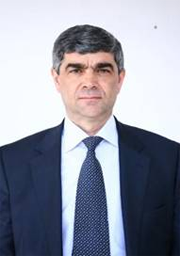 Vitaly Balasanyan was born in 1959, in the village of Askeran, in Mountainous Karabakh. He graduated from Yerevan’s Technical Cooperative in 1990.

1992: He was appointed Commander of the MKR Armed Forces for Askeran.

1999: He was appointed deputy defense minister.

2000: Was bestowed with the title of Major General.

He was decorated with MKR’s First Class “Battle Cross” order and in 2002 he received Artsakh’s highest rank of Hero and was bestowed with the Golden Eagle order.

He was a member of MKR’s first parliament, the Supreme Council.

2005: He was elected to MKR parliament on the ARF-Movement 88 political coalition’s proportional list.

He was a member of the MKR Parliamentary Standing Committee on Defense, and Security.

He is a member of the MKR Parliamentary Standing Committee on Defense and Security.

He is not a member of any political party.