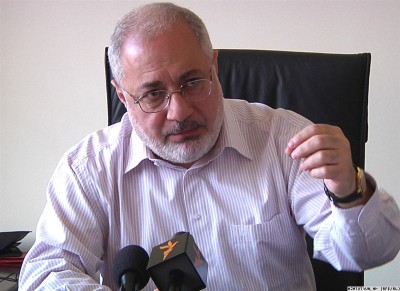 Hovhannesyan, who heads the Dashnaktsutyun faction in the Armenian parliament, described as “unacceptable and disgraceful” the deaths of seven military personnel in two non-combat incidents reported last week.

“We expect that there will be a fair investigation and the guilty will get a fair and severe punishment,” he told RFE/RL’s Armenian service. “We are confident that the defense minister is able to take drastic steps on this matter. He is not only able but also obliged to do that.”

Hovhannesyan refrained from commenting on preliminary official versions of the shootings questioned by relatives of some of the victims, notably Lieutenant Artak Nazaryan.

Military investigators insist that Nazaryan committed suicide after being badly mistreated by fellow servicemen. Four of them are now under arrest pending investigation. The officer’s family believes that he was killed.

Defense Minister Seyran Ohanyan has assured the grieving families that “everything” is being done to solve the shootings that highlighted chronic problems within the Armenian army. Ohanyan and other military officials have at the same time argued that the number of such incidents has significantly declined since the late 1990s.

Hovhannesyan countered, however, that there was more “solidarity” and “mutual respect” within the armed forces during the 1991-1994 war with Azerbaijan and its aftermath. “At some point, the situation changed because unacceptable and ugly practices began penetrating the army from outside,” he said.

“Brute force and the will of individuals with prison connections, as opposed to army rules and discipline, started becoming prevalent in the army. Of course, this is not a widespread phenomenon but it is visible in some cases,” added the Dashnaktsutyun leader.

Hovannesyan noted that no army in the world is immune to abuses and violations resulting non-combat deaths. “But all armies fight against such phenomena,” he said. “We are demanding such a fight from our authorities and especially the Defense Ministry.”

Hovannesyan said that the Armenian army is “very combat-ready” and with a “normal leadership.” “It’s just that that leadership has committed mistakes and it must rectify them,” he said.