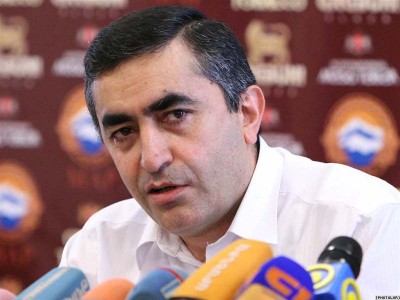 In an interview with RFE/RL, Armen Rustamyan, the chair of the ARF-D Supreme Council in Armenia said that the Dashnkatsutyun is in favor of the international recognition of the Nagorno (Mountainous) Karabakh Republic and in principle, is not opposed that Armenia be the first to recognize its independence.

In response to the question that would the ARF-D parliamentary faction join the Heritage Party’s legislative initiative to have Armenia recognize the independence of Mountainous Karabakh, Rustamyan said that while they are not opposed, they are not however in favor of that being an initiative of one single political power.

“It should be something agreed upon by both Armenia and the Republic of Mountainous Karabakh. This is a serious national issue and as long as that agreement does not exist – and there is no accurate assessment of this – we cannot, with our actions, tow a separate line which will bear no result. On the contrary, it can for example, raise more questions,” noted the parliamentarian. “If, for example the majority [in parliament], which represents the ruling authority, is opposed to the recognition of Karabakh at the present time, and it [the legislative initiative] is included in the agenda and it is rejected, could Azerbaijan not say, ‘you see, clearly Armenia also does not accept it, Karabakh must not be recognized’?”

For these very reasons, the ARF-D is proposing that the authorities of Armenia and Mountainous Karabakh sign an alliance with each other.

“We find, at the very least, that the time is ripe to move toward an alliance. In other words, to sign a political/military alliance with Mountainous Karabakh, within whose perimeters it will be possible to speak about all the issues, without making it [recognition] official, which might present undesirable manifestations in the negotiation process. But then no one will be able to say to us, ‘why did you sign an alliance?’ when they hear the announcements being made by Azerbaijan, when issues of security in this environment have become the most pressing problem, when on a daily basis there are shootings on the borders, when people are dying,” Rustamyan stated. “In other words, the signing of a political/military alliance will be a step, which will also ripen the recognition of Karabakh because recognition in and of itself, will not resolve these issues.”

Regarding an armed confrontation two days earlier when Azerbaijani armed forces staged an attack near the village of Verin Chailu in the region of Mardakert, the ARF-D leader said with conviction that the foreign affairs ministry “certainly must turn this into a serious issue, must present this issue at all of the highest forums, the OSCE, the UN and all other places where it is possible.”

“We cannot remain in this fearful condition and constantly wait to see what Azerbaijan will do tomorrow so that we can respond accordingly. We must adopt a policy of being the initiator, something which is not being done today unfortunately,” stressed Rustamyan.