On October 28, a delegation of Members of the European Parliament arrived in Stepanakert, the capital city of the Mountainous Karabakh (Artsakh) Republic (MKR) as part of their visit to Armenia and MKR from October 27-31. The European delegation was composed of Damien Abad (European Peoples’ Party) and Michele Rivasii (Group of the Greens/European Free Alliance), accompanied by EPP expert Nicholas Silberglied and European Armenian Federation (EAFJD) chairperson Hilda Tchoboian.

The European delegation met with the President of MKR Bako Sahakyan. Issues related to widening ties between MKR and the European community, the Azerbaijani-Karabakh conflict settlement, as well as regional developments were discussed during the meeting.

President Sahakyan underlined that a balanced and multi-vectored approach was the basis of MKR’s foreign policy, and within this context the republic was interested in deepening relations with Europe and its different structures. The necessity of a peaceful settlement of the Azerbaijani-Karabakh conflict within the framework of the OSCE Minsk group was mutually noted.

Ashot Ghulyan, the Chairman of the National Assembly of MKR and deputies of the Armenian National Assembly Vahan Hovhannesyan (ARF-Dashnaktsutyun) and Ara Babloyan (Republican Party) also attended the meeting.
Ashot Ghulyan briefly presented the efforts made by MKR with regard to state-building and noted that they have been consistently and steadfastly realizing the principles and norms of democracy. At the same time, he expressed dismay that European structures almost always express lack of enthusiasm every time presidential, parliamentary or local elections take place in MKR. “In that case, a question arises,” noted Mr. Ghulyan. “What does Europe want? That we don’t form a government? That we don’t have elected authorities?” In addition, he reminded the delegation about the positive orientation that the European Parliament had back in 1989 regarding the issue of the Karabakh Movement and where in its adopted position had qualified it as fully democratic.

Members of the European delegation highly appreciated MKR’s successes in building a democratic state, emphasizing the importance of democracy for the whole region.

During their visit to MKR, the MEPs met with the representatives of civil society including the heads of the organizations in charge of refugee issues. “The meetings helped the MEPs understand that Azerbaijan’s Armenian refugees are the descendants of residents of Artsakh, as well as from liberated territories. In the early 1990s, when these people were subjected to pogroms and genocide, they returned to their native land,” ARF-D parliamentary group leader Vahan Hovhannesyan emphasized, noting that the members of the European Parliament were unaware of the fact. Hovhannesyan noted that “the European Parliament delegation agreed with the Armenian side that non-recognition by the international community does not suggest that international law should not be implemented in the country.” Hence, the possibility of including the refugees in Karabakh with EU assistance programs was also discussed.

“Personally for us, it is difficult to say as to how the Karabakh conflict will be resolved,” said Ms. Rivasi but added that it was possible even now to find ways to work and cooperate between civil society organizations in MKR and European structures. “It is unacceptable that hundreds of thousands of Armenian victims of the pogroms and deportations organized by Azerbaijan, are deprived of the international statute of refugee,” declared Mrs Rivasi. She proposed the implementation of an international investigation on the atrocities against the Armenians which led to the conflict.

“I think that the OSCE Minsk Group remains the best format to find a peaceful and sustainable solution to the conflict,” added Damien Abad. He stressed the importance for France to fully play its role in the co-presidency of the Minsk group, along with Russia and the United States.

The European delegation also visited the MKR National Assembly and met with representatives of the parliamentary factions, including Armen Sargsyan, leader of the ARF-D faction.

The MEPs proposed to study the possibility of assistance to the population of Nagorno-Karabakh in the fields of environment, energy and education. “This European aid exists in the South Caucasus region for Abkhazia and South Ossetia, but it is refused in Nagorno-Karabakh,” commented Hilda Tchoboian, the Chairperson of the European Armenian Federation. She underlined the fact that Nagorno-Karabakh declared its independence in accordance with the Internal Law of the Soviet Union and with the full respect of the principles of the International law. 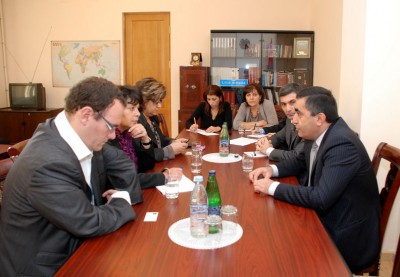 The European Armenian Federation said it was satisfied with the high-level meetings, which allowed the MEPs to get a thorough understanding about the Karabakh conflict in all its judicial, political and humanitarian dimensions.
Returning back to Yerevan on October 29 the delegation met with Chair of the ARF-D Supreme Council of Armenia and Chair of the Parliamentary Standing Committee on Foreign Affairs Armen Rustamyan, who welcomed the guests and emphasized the importance of their visit to MKR. Mr. Rustamyan said that this visit undoubtedly afforded the delegation the opportunity to become better acquainted with and informed about the many facets of the Karabakh conflict and to assist in its resolution.

At the request of the delegation, Armen Rustamyan spoke about regional issues, European integration, the Armenia-Turkey protocols, solutions to the Karabakh conflict, the return of refugees, prisoners of war, etc. He stressed that the Armenian side remains loyal to the OSCE Minsk Group mediation in the conflict. He reminded the delegation that the people of Karabakh embarked upon their liberation based on the domestic laws of the USSR and in compliance with the principles of international law.

Prior to leaving, Michele Rivasi said, “We saw that the situation is very delicate. I must say that it is difficult to give an exact evaluation of the situation from Europe. We saw a region, which is struggling against an aggressor…We must further develop our relations with this region and help realize programs in economic sectors. It is unacceptable that Armenia has been excluded from Caspian and Black Sea energy programs.” With regard to the resolution of the Karabakh conflict, Ms. Rivasi said that it will be possible if it satisfies all the sides, Russia, Armenia, Azerbaijan and “of course MKR, which most certainly must be part of the negotiations.”

Damien Abad for his part said, “I am very happy and proud of that friendship which exists with Armenia and that we have a parliamentary friendship group in France. It is imperative that France fulfills its role within the OSCE Minsk Group and helps Armenia and Mountainous Karabakh.”