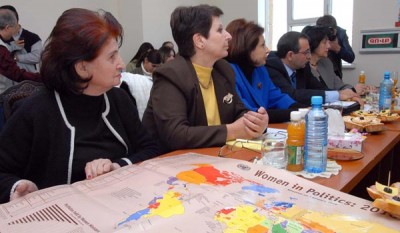 A representative of the Armenian National Assembly’s majority party believes a legal amendment ensuring women’s greater involvement in leadership positions would be effective in dealing with gender discrimination issues.

Still, some remain skeptical about this approach, calling it a sort of discrimination in itself to single out a woman’s factor in a legislation supposed to relate to gender equality and both sexes.

During a discussion at the National Press Club on Wednesday focused on changes in Armenia’s gender-related legislation and their possible impact on legal and social policies in the country, Republican Party of Armenia (RPA) parliamentary faction member Karine Achemyan said an examination of international experience led the faction to propose a draft law under which the number of women in the 131-seat National Assembly shall be at least 10 percent.

(Currently, there are 12 women MPs in the Armenian parliament, which is less than 10 percent).

Jemma Hasratyan, chairwoman of the Association of Women with University Education, an organization promoting leadership among women, said that international practice has long moved farther in this matter and discussing such a limited participation of women in the legislative process is simply meaningless.

“According to a Council of Europe Parliamentary Assembly pledge to which Armenia should also be committed, women in the National Assembly should occupy at least 40 percent of seats, and if a woman MP resigns, it is another woman who should replace her,” says Hasratyan.

The civil society representative reminded the RPA lawmaker that only 3 percent of that party’s faction are women and that, by contrast, women constitute half of the minority faction, Heritage. In the other three factions at the National Assembly: women make 25 percent of members in Prosperous Armenia and the Armenian Revolutionary Federation (Dashnaktsutyun), and a little less than 25 percent in Orinats Yerkir.

By the degree of women’s representation in parliament Armenia ranks 108th among 141 reviewed countries, along with Kenya, Niger and Malaysia. The leading positions by women’s involvement in legislative activities are held by Sweden, South Africa and Cuba.

Member of the Armenian Revolutionary Federation (Dashnaktsutyun) faction Artsvik Minasyan agrees that if women constitute more than half of the public and have a very limited involvement in economic and political affairs, it can already be regarded as a serious omission. But he says in legislating one should be careful with definitions.

“Only women’s rights are being discussed, meanwhile this is first of all about gender equality. In drafting such a bill one should be careful not to single out a woman’s factor, but consider everything on an equal plain,” says Minasyan.