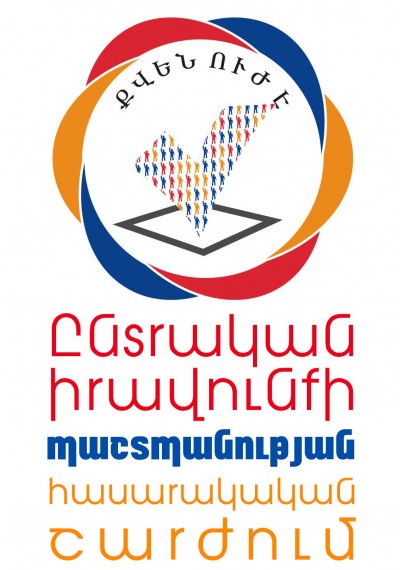 The aim of the movement is “to establish the authority of the people through the realization of the electoral right.”

The movement is against the culture of electoral fraud and will focus on raising public awareness of electoral rights and discouraging Armenians from selling their votes.

The movement will have a comprehensive set of legal, political and organizational activities, which are divided to three main phases: pre-election, election day and post-election. In parallel to these, the necessary atmosphere will be created for the removal of the vicious system by which the authorities self-perpetuate themselves.

The movement is a means to establish the government of the people through free expression of will. The “alternative” is the self-perpetuation of the authorities or the post-election confrontations.

The ARF-Dashnaktsutyun declared that it will fully support the organization of a movement with a wide network of public unity and with the slogan “Vote is Power.”

On a related issue, The Armenian Revolutionary Federation-Dashnaktsutyun on Friday condemned the new power-sharing deal cut by President Serzh Sargsyan and his political allies, saying that it threatens to thrust Armenia into authoritarianism.

In a joint declaration signed on Thursday, Sargsyan’s Republican Party and its junior coalition partners, the Prosperous Armenia and Orinats Yerkir parties, pledged to campaign for the incumbent president’s reelection in 2013. The governing parties also made clear that they will contest next year’s parliamentary elections without “changing correlation of forces within the Coalition.” They expressed confidence that they will have even more seats in Armenia’s next parliament.

Rustamyan, a Dashnaktsutyun leader, called these declaration provisions “absurd,” saying that the coalition parties are effectively predetermining the outcome of the parliamentary polls due in May 2012.

“Today the coalition forces have more than 100 deputies [in the current 131-member National Assembly],” Rustamyan told the media. “Can their presence get any bigger? At whose expense? Must there be no opposition at all in this country?”

“At issue is a monopolization of the entire political stage,” he said.

Chairman of the ARF-Dashnaktsutyun Bureau Hrant Margaryan also denounced the deal, saying that it will have “extremely negative” consequences for the country. “In effect, a dictatorship, a totalitarian system is thus being formed in the government camp,” he charged.

The Armenian Revolutionary Federation (ARF, Dashnaktsutyun) has initiated a movement that it says stands above party and sectional interests for a clean vote in the coming polls after Armenia’s governing coalition completed its consolidation late last week.

Through this movement the party hopes to achieve “public-political mobilization” to prevent large-scale fraud in the May 2012 parliamentary elections.

Concerns about possible fraud during the upcoming polls have been voiced by the opposition in the wake of the announcement on February 17 of a new coalition memorandum by President Serzh Sargsyan’s ruling Republican Party and its two junior partners, Prosperous Armenia and Orinats Yerkir, among other things pledging “not to strive to increase their political weight through contesting against each other or changing correlation of forces within the coalition” in next year’s elections.

ARF Bureau representative Hrant Margaryan described the memorandum as an attempt by the government forces “to establish totalitarianism, which is fraught with serious dangers”.

The coalition forces, however, deny the accusations and stress that their statement of intention “to not go against each other” is consistent with democratic practice.

“If we ensure the voting rights, all other rights, be they political or civil, will be ensured in the country. The goal is clear — to establish the people’s rights through suffrage,” says ARF Supreme Council of Armenia representative Armen Rustamyan. “Only when the voter realizes that his or her vote is protected and will not sell it for 5,000-10,000 drams will we have a peaceful and meaningful change of power in Armenia.”

Dashnaktsutyun urges all forces to join its movement considering that battling fraud is a task that cannot be accomplished by one political party only. The party plans to divide the process of ensuring voter rights into three parts: activities during the pre-election period, on election day proper, and after the elections.

Rustamyan says the main goal is to prevent the reproduction of the power system in conditions of the party-government-state fusion.

“Not valuing their votes voters sell them or let others have it. Naturally, the authorities generally take advantage of this situation,” says Rustamyan, adding that only a broad movement is capable of stopping the government from reproducing itself.

The motto of the nascent election rights movement is “a vote is power”.

ARF parliamentary faction secretary Artyusha Shahbazyan says that a hasty power change declared by some political forces is unrealistic, and so Dashnaktsutyun shows “a more civilized way” to the public.

He says a number of nongovernmental organizations have already joined the initiative.

ARF’s Margaryan says: “Such concentration of political power and such polarization will lead to the formation, by the public, on the other pole of a political, and, which is more dangerous, a spontaneous force, with all its consequences.”

According to Margaryan, by trying to create an atmosphere in which the outcome of elections would be a foregone conclusion the authorities prod part of society to radicalization, which may entail new tragedies.

Dashnaktsutyun believes their movement will promote public consolidation around the idea of holding fair elections.