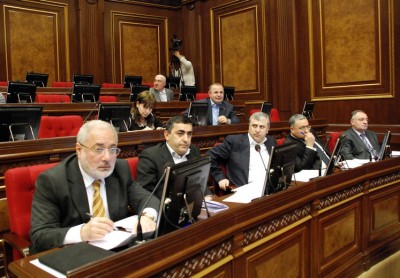 Members of the ARF-D parliamentary faction

On March 22 and 23, lawmakers at the National Assembly held heated first-reading discussions over the ruling coalition-proposed amendments to the Electoral Code of Armenia and the alternative draft submitted by the Armenian Revolutionary Federation-Dashnaktsutyun.

The amendment to the current Electoral Code ahead of the upcoming parliamentary (May 2012) and presidential (Fenruary 2013) votes is, in fact, the Council of Europe’s demand. The objective of these changes is the improvement of electoral legislation, electoral processes and electoral administration, where suggestions made by a number of international organizations, the Venice Commission, and non-governmental organizations are taken into consideration.

The ARF-D proposed alternative draft, which was rejected today, as an essential point suggested publishing the list of voters who go to the polls. The government, however, was against this suggestion quoting the Venice Commission that it would violate the secrecy of the vote.

“Or maybe because in this case people will also be aware of the process when people who have died long ago also ‘participated’ in the voting,” head of the ARF-D parliamentary faction Vahan Hovhannisyan said, refering to a report submitted to parliament early in the week by the Chairman of the Control Chamber Ishkhan Zakaryan. That report stated that as a result of a partial auditing held at the State Social Insurance Service of the Ministry of Labor and Social Affairs of Armenia, it was revealed that many dead people had “received” pensions in Armenia. The auditing was held in 14 out of 51 territorial departments of the State Social Insurance Service and it revealed that within eight months of 2008, 2009, and 2010, 58,921 dead people “received” pensions.

The ARF-D package of amendments was presented to the National Assembly by ARF-D faction member Artsvik Minasyan. He noted that many interpellations existed in the electoral legislation, which were reflected in PACE resolutions, in decisions of RA Constitutional Court, in conclusion of the RA NA Ad-hoc Inquiry Committee on the March 1-2 events. He stressed, that the ARF-D’s proposals address all those concerns.

The ARF-D proposals included video recording of the whole election process, as well as increasing women’s involvement at the National Assembly by setting a 30% quota for women representation, installing electronic ballot-boxes, so that it will be possible to know at any moment how many ballot-papers a ballot-box contains.