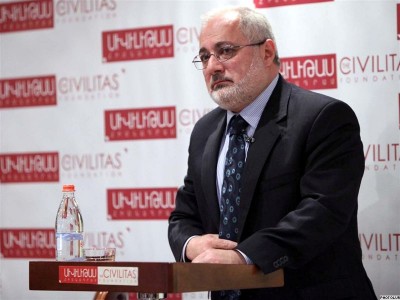 More than 150 guests – representatives of international and local organizations, government and academic institutions, diplomatic missions in Armenia as well as media – gathered to hear the second guest of the Civilitas Foundation “100 Questions and Answers” series. The speaker, Armenian Revolutionary Federation [Bureau member and] Parliamentary Faction leader Vahan Hovhannesyan, responded to questions in a discussion moderated by Editor-in-Chief of Aravot Daily Aram Abrahamian who fired questions at Mr. Hovhannesyan who greeted his audience as the “remnants of the Armenian intelligentsia.”

Questions were put forth by members of the audience, as well as online. His colorful responses revolved around the upcoming elections, ARF history and party politics, public attitudes toward those in and out of power, those striving for power, and the power struggle itself, Armenia-Diaspora relations, as well as urgent issues facing the country such as a possible environmental crisis, economic hardships, and repopulation of freed territories.

Mr. Hovhannesyan spoke about the possibility of entering into a coalition either with the other opposition forces, or with the ruling parties. “No political entity decides to cooperate with an individual — rather, cooperation must be around a program, concrete steps, fair elections,” said the former presidential candidate.

Mr. Hovhannesyan also commented on what he termed Armenia’s growing economic dependence on Russia, the dysfunctional workings of the Armenian government, where each party supervises its own ministers, the situation of the Armenians of Georgia’s southern Javakhk region, as well as domestic politics.