YEREVAN —The joint statement on the Mountainous-Karabakh conflict issued by presidents Obama, Sarkozy and Medvedev in Deauville, France last month is not in beneficial for Armenia, said Armenian Revolutionary Federation-Dashnaktsutyun parliamentary faction chairman Vahan Hovhannesyan at a press briefing Monday.

He added that it was impossible to make prediction on the outcome of scheduled talks later this month between the presidents of Armenia and Azerbaijan in Kazan, Russia, saying that none of the documents that have emerged from the conflict resolution process represent the interests of Armenia.

Hovhannesyan recommended that Armenia should, at one point, withdraw from the negotiation process and insist on new talks with the participation of Karabakh.

He also added that Armenia missed an opportunity to restart talks under a new format when Azerbaijan called for revamping the format.

Hovhannesyan also stressed that Azerbaijan has never hidden its unwillingness to compromise and it has, on numerous occasions, spoken that it will not agree to Karabakh’s independence. 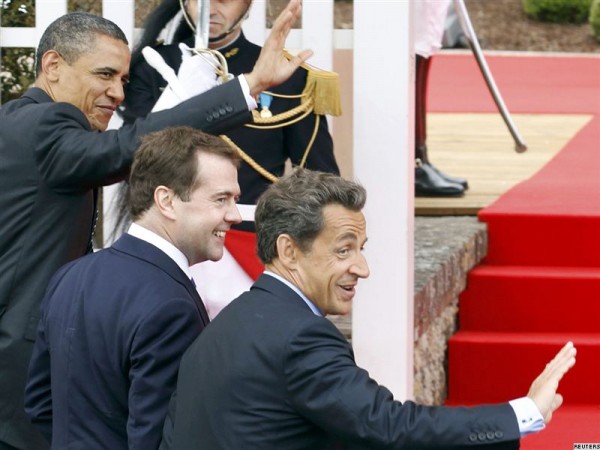 Joint statement on the Nagorno-Karabakh Conflict, by the Presidents of the OSCE Minsk Group Co-Chair Countries at the G-8 Summit

Joint Statement on the Nagorno-Karabakh Conflict

We, the Presidents of the OSCE Minsk Group’s Co-Chair countries — France, the Russian Federation, and the United States of America — are convinced the time has arrived for all the sides to the Nagorno-Karabakh conflict to take a decisive step towards a peaceful settlement.

We reiterate that only a negotiated settlement can lead to peace, stability, and reconciliation, opening opportunities for regional development and cooperation. The use of force created the current situation of confrontation and instability. Its use again would only bring more suffering and devastation, and would be condemned by the international community. We strongly urge the leaders of the sides to prepare their populations for peace, not war.

As a result of efforts by the parties and the Co-Chair countries at all levels, significant progress has been made. The latest version of the Basic Principles, as discussed in Sochi on March 5, lays a just and balanced foundation for the drafting of a comprehensive peace settlement. This document, based on the Helsinki Final Act and elements outlined in our joint declarations in L’Aquila in July 2009 and Muskoka in June 2010, provides a way for all sides to move beyond the unacceptable status quo.

We therefore call upon the Presidents of Armenia and Azerbaijan to demonstrate their political will by finalizing the Basic Principles during their upcoming summit in June. Further delay would only call into question the commitment of the sides to reach an agreement. Once an agreement has been reached, we stand ready to witness the formal acceptance of these Principles, to assist in the drafting of the peace agreement, and then to support its implementation with our international partners.