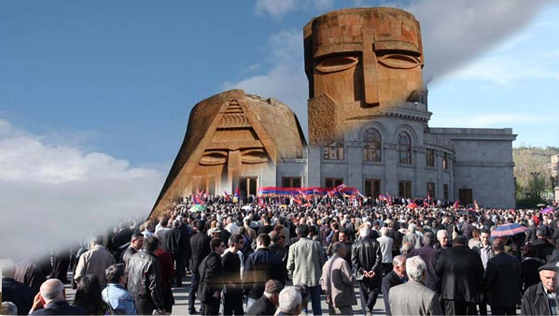 The two major parliamentary opposition parties critical of the non-parliamentary Armenian National Congress (HAK) have suggested that there are ulterior motives behind its decision to embark on a dialogue with President Serzh Sargsyan’s government. While saying they welcome the emerging dialogue between the HAK and the authorities, they express doubts that it will eventually lead to useful results for the people. Thus, senior Dashnaktsutyun lawmaker Armen Rustamyan does not rule out that redistribution of some spheres of influence or even property may take place as a result of this dialogue, but that “will not bring any substantial change for the people.”

According to the Zharangutyun (Heritage) party and the Armenian Revolutionary Federation (Dashnaktsutyun), the two sides (the HAK and the authorities) may be intent on cutting secret deals that would make it easier for the government to make more concessions to Azerbaijan and Turkey.

“If that dialogue leads to fresh elections … we will only welcome that extraordinary solution,” Zharangutyun leader Raffi Hovannisian said as he addressed several dozen supporters in Yerevan’s Liberty Square on Saturday.

“But if there is a different agenda leading to deals, containing other issues — regular solutions, unacceptable concessions on the Artsakh (Nagorno-Karabakh) issue, the continuation of the unacceptable policy on Turkey-Armenia relations — then I think the people will say no to that collusion,” he warned.

Hovannisian claimed that the government and the HAK might also go as far as to agree on a mutually acceptable cover-up of the March 2008 violence in Yerevan.

Dashnaktsutyun’s parliamentary leader and former presidential candidate, Vahan Hovannesyan, voiced similar misgivings about that dialogue at a news conference on Monday. He questioned the HAK’s commitment to attaining its most important stated goal: fresh presidential and parliamentary elections.

Hovannesyan argued that that HAK leader and Armenia’s first President Levon Ter-Petrosyan opted for the dialogue despite the fact that government officials and loyalists have categorically ruled out the possibility of such polls. “That means one of the parties accepts that there may be a change in the agenda of discussions,” he said.

The ARF-D leader explained that Armenian National Congress leader Levon Ter-Petrosyan succeeded in making the international community to exert pressure on Armenia’s authorities to engage in the dialogue. He warned, however, that the exerted pressure is not meant to strengthen democracy in Armenia, but rather a way to influence the Karabakh peace process.
Like the Zharangutyun leader, Vahan Hovannesyan implied that Ter-Petrosyan and Sargsyan have similar views on how to resolve the Mountainous-Karabakh conflict and normalize Turkish-Armenian relations.

Dashnaktsutyun and Zharangutyun favor a harder line on both issues. In particular, they both reject the basic principles of a Karabakh settlement proposed by the U.S., Russian and French mediators. Official Yerevan has repeatedly described the proposed settlement as largely acceptable.

Other leading members of the two opposition parties have similarly speculated that the HAK is now ready to let Sargsyan hold on to power in return for government guarantees that it will have a solid presence in the next Armenian parliament.

Ter-Petrosyan denounced such “malevolent gossips” at the last HAK rally held on May 31. He insisted that his alliance will seek to achieve “regime change” in Armenia through the dialogue.

Members of the President Serzh Sargsyan’s Republican Party ruled out the convening of snap elections—a high priority demand by Ter-Petrosyan—when they unveiled their plan for the so-called “dialogue.” Hovhannesyan explained that Ter-Petrosyan’s willingness to move forward with the “dialogue” despite the overt rejection of snap polls indicates that Ter-Petrosyan is changing course.

“The Armenian Revolutionary Federation has also been talking to the authorities, but specifically within the framework of the amendments to the Electoral Code. The few ARF proposals that have been adopted were the result of dialogue,” explained Hovhannesyan who wanted to draw a distinction between dialogue that aims to reform the current situation and one that serves an individual’s self interests.

Armenian Revolutionary Federation-Dashnaktsutyun Executive Council of Armenia chairman and head of the National Assembly’s Standing Foreign Relations Committee Armen Rustamyan said: “This dialogue contains many dark aspects. We have serious concerns that the Karabakh conflict and the Armenian-Turkish process may become issues on the agenda of negotiations [between the government and the radical opposition].”

According to some observers, “there is a growing undercurrent of opinion that the only force capable of becoming a real opposition to such a prospect is the Dashnaktsutyun party and, however paradoxical it may be, ex-president Robert Kocharyan. It is yet early to state that the second president of Armenia will certainly return to active politics, but it is not excluded that his comeback will take place against the backdrop of the Karabakh issue.”