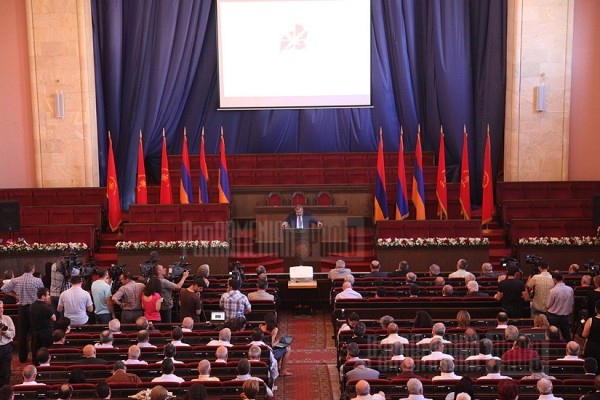 YEREVAN—Delegates, leaders and guests from around the world gathered at the Armenian Government House Large Assembly Hall for the kick off of the Armenian Revolutionary Federation-Dashnaktsutyun’s 31st World Congress, which is the party’s highest policy-making assembly.

During the opening session of the World Congress, which was attended by representatives of different political parties, ARF-D Bureau chairman Hrant Margaryan made a presentation, in which he assessed the state of the nation, the Republic and the party.

In highlighting important events of the past three years, which was the last time the World Congress was held, Margaryan pointed to the inadequacies of the Armenian government in dealing with such significant issues as the Armenia-Turkey protocols, the global economic downturn and the general social-economic situation in Armenia.

His message of “the ARF-D is the party of the future” was also highlighted by Margaryan’s discussion of the ARF-D’s approach to fundamental issues in Armenia and his explanation that the ARF, through working with the people will create an atmosphere whereby the leadership of the country will be of the people.

Margaryan said that the the Armenian Revolutionary Federation-Dashnaktsutyun stands for a “systemic regime change” in Armenia but considers any “revolutionary” action taken for that purpose unacceptable. “When there are no real reasons for revolution and life itself doesn’t dictate it, revolutionary activity becomes an unacceptable adventure,” he said.

“The current authorities have neither the will nor the ability to put an end to corruption, economic injustice and the impunity of the privileged class,” he said in a speech. “We need a systemic regime change.”

Margaryan reaffirmed Dashnaktsutyun’s rejection of the “basic principles” of the Mountainous kArabakh conflict’s resolution which Armenian President Sargsyan was due to discuss with Azerbaijan’s President Ilham Aliyev in Kazan, Russia later in the day. He said they require “unacceptable concessions” from the Armenian side.

“The whole nation must be prepared to face that not-so-unlikely moment,” Margaryan added, referring to the possible signing of an Armenian-Azerbaijani peace accord at Kazan.

The Dashnaktsutyun 31st World Congress, with some one hundred voting and non-voting delegates from around the world, will continue in the resort town of Tsaghkadzor in the following days.