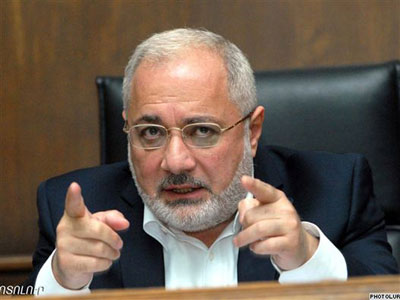 During a press conference, Head of ARF-D Parliamentary Faction and Bureau member Vahan Hovhannesyan referred to the growing rate of poverty in Armenia and said that under these extreme circumstances, counting achievements is not possible. In reply to a question about recent changes of state-figures he also said that people are keep getting poorer irrelevant to who is appointed in public sector’s high places. These changes are taking place merely to create an impression of government work. Commenting on the foreign policy he pointed out the announcements made during both the Lebanese and French Presidents’ visits to Armenia and reminded that ARF-D demands the withdrawal of Armenia’s signature from the Armenian-Turkish protocols. Asked about the forthcoming elections he said “The harvest of votes has already begun and to think that in the end fair and transparent elections will take place is absurd. As far as Armenian National Congress’s (ANC) pre-electoral platform is concerned Hovhannesyan reminded the “Vote is Power” movement initiated by ARF-D and the collaboration on this with Heritage (Zharankutyun) Party and underscored that a year and a half ago when this movement was being formed, ANC didn’t support it and raising an issue such as this, at this moment in time serves only ANC in reinforcing itself. Still, Hovhannesyan said that ANC could join the “Vote is Power” movement and help improve the legislation on elections.