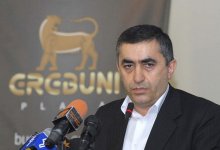 “If the main political forces agree in principle to pass to a 100% proportional electoral system why not do that now? Why is it that ARP (Armenia’s Republican Party) doesn’t take that step now? The single-constituency system has served on one hand as a tool for the authorities to reproduce themselves and on the other as a means to keep the opposition out… This is as if we are about to run the 131-meter track and we are asking everyone to share the same starting line but the authorities are saying that they have to be 41 meters ahead. This is an unfair competition” said ARF-D Member of Parliament Armen Rustamyan referring to the 131 parliamentary and 41 single-seat constituency seats during a forum that took place in Erebouni hotel, today and was co-hosted by the ARF-D and Heritage (Zharangutyun) parties. Representatives from Armenia’s Republican Party (HHK), the Armenian National Congress (HAK), the Prosperous Armenia Party (BHK), the Rule of Law Party (OEK) and the Liberal Democrats were also present at the meeting.

“I found very amusing the PACE opposition to pass to a 100% proportional system” commented Prosperous Armenia Party’s MP Naira Zourapyan, “I’ve been also amused by the PACE rapporteur’s (Prescott) behavior. I think any dignified political person shouldn’t allow others to preach on how to run an elections process. They have to remain neutral” she said.

Levon Zourapyan from the Armenian National Congress expressed his party’s readiness to support the results coming out from today’s forum.