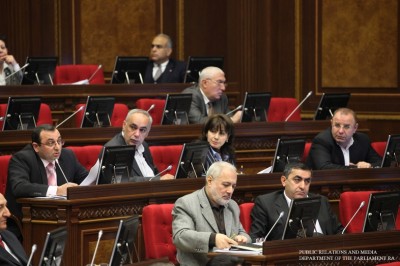 The ARF-D Parliamentary Faction remained neutral during today’s voting of the draft law “On Restriction of cash operations”. According to www.mardik.am, the ARF-D Member of Parliament Artsvik Minasyan explained that the draft law contains some risks that should be reviewed and if lifted by the government between the first and second hearings then ARF-D will vote in favor.
Minasyan said that it wasn’t specified whether the limit of three-million drams or more was referring to a single transaction or to a chain of transactions that summed up would reach the three-million limit. In the second case, taxes could be enforced both to citizens and economic entities.
Another risk included in the draft law was about the non-regulation of the bank services prices the use of which is obligated by the law. Minasyan said that the bank services’ quality and prices should be state regulated and since the draft law provided no such information then by voting in favor “we could simply make the already rich financial sector even richer” simultaneously pointing out its low involvement in the financial development process.