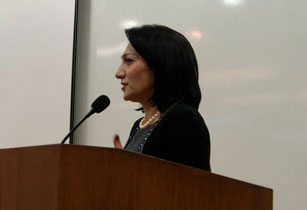 The draft law “On Amending the Legal Regime of the State of Emergency” was submitted on Wednesday February 8, by the Justice Minister for debate in the first reading of the Parliament. Taking the floor, ARF-D Member of Parliament Lilit Galstyan said that while this is a very important draft law still there are some flaws that needed to be clarified. Galstyan referred to the lack of clear definition as to the circumstances that will activate the law and the role of the Parliament as far as the declaration of the emergency state is concerned. The ARF-D MP commented on the latter said that this draft law limits the role of the Parliament only to an advisory level and it doesn’t specify the extraordinary sitting’s agenda, jurisdiction and authorization. Galstyan concluded by saying that the draft law lacks also a mechanism of mutual control that is a typical attribute of democratic states.