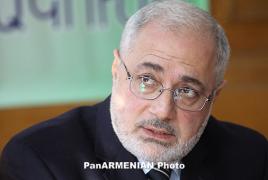 During today’s press briefings at the Parliament, the Head of ARF-D Parliamentary Faction Vahan Hovhannesyan said that the adoption of the law “On Private Guard Activity” was very important and reminded that it was the ARF-D that first introduced it around 2000 concerned about the unacceptable accumulation of these services around the rich elite. ARF-D’s proposition got always rejected by the government but now, since Armenia’s Republican Party (HHK) is one of the authors the law was adopted, he argued.

Asked to comment on the repetition of the voting procedure that took place yesterday in the Parliament, Hovhannesyan pointed out that this isn’t the first incident of this sort and added that atrocities have taken place. “This means that the ruling political force isn’t really a force but rather it forces itself to power. It doesn’t have the ability to convince. Obviously, it’s not even in a position to organize its own faction’s voting attendance” said Hovhannesyan citing the fiasco caused by the ARP ally, Prosperous Armenia Party’s withdrawal from the February 6 voting. The ARF-D MP believes that if ARP and its leaders think that the adoption of a single law is more valuable than the state’s image, the Parliament’s as well as their own dignity and if they use any means to justify their purpose then they will always do so. “If you spit on and bypass the law why should I trust you in conducting fair elections?” wondered Hovhannesyan.