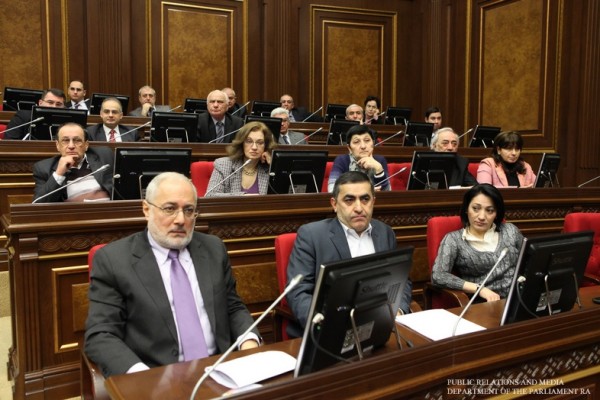 A standing committee of the Armenian parliament held on Wednesday, February 15, hearings on a major voting reform which the country’s leading opposition forces say would make the upcoming parliamentary elections more democratic.

The committee on legal affairs agreed to discuss the idea of holding the elections only on a party-list basis despite its rejection by the majority of the ruling coalition in the National Assembly. The Armenian government has spoken out against a relevant bill drafted by the opposition Armenian Revolutionary Federation (Dashnaktsutyun) and the Heritage (Zharangutyun) party.

In accordance with Armenia’s existing Electoral Code, 90 of the 131 parliament seats were contested under the system of proportional representation in the last legislative elections. The remaining 41 deputies were elected in single-seat constituencies across the country. Opposition leaders say voters are more vulnerable to bribes and intimidation when they pick individual candidates. The majority Republican (HHK) party in the ruling coalition denies this and says the single-mandate districts are needed because most Armenian parties do not have strong branches outside Yerevan.

Lawmakers from Dashnaktsutyun and Zharangutyun sought to disprove the government arguments during the committee hearings. “In those districts people don’t even know who their deputy is because not only he doesn’t live there but doesn’t even visit it,” said Vahan Hovhannesyan, Dashnaktsutyun’s parliamentary faction leader. “And here they don’t approach the podium and say a word [during parliament sessions.]”

Armen Rustamyan, chairman of both the Dashnaktsutyun’s Supreme Council of Armenia and parliament’s Foreign Relations Committee, dismissed the HHK claims that the single-mandate constituencies allow for a direct link between the National Assembly and the Armenian provinces. “That link begins and ends with the distribution of vote bribes,” Rustamyan said.

The result of the will be clear on February 28, when the issue will be brought to vote. Davit Harutyunyan, chairman of the parliamentary committee which organized the hearings, made clear that the his Republican (HHK) party will vote against it.

“Here we have ‘full consensus minus one’ state in the political field, which is created by the ruling Republican Party [HHK],” stated Armen Rustamyan from the National Assembly tribune; however he is not sure whether eventually they will win or will not.

“We do not know how they [lawmakers] will vote in the end,” Rustamyan told the media, implying the coalition junior partner Prosperous Armenia Party (BHK), the members of which have expressed their positive attitude towards the issue and supported bringing it up for discussion.

However, at the parliamentary hearings, BHK member, NA Deputy Speaker Samvel Balasanyan stated that making such changes is untimely now, which raised suspicions that there is no consensus regarding this issue in BHK.

During a heated discussion the opposition lawmakers presented reasons why they believe it is necessary to pass to 100-percent proportional system of voting.
ARF-Dashnaktsutyun’s Vahan Hovhannesyan submitted a whole list of lawmakers elected by majoritarian system, disagreeing with his HHK counterparts’ claims that the lawmakers elected by majoritarian system support and keep the connection with electors from provinces.

Senior members of other opposition groups not represented in the current parliament, notably the Armenian National Congress (HAK), also took part in the discussion. Levon Zurabyan, the HAK coordinator, said that elections in the nationwide constituencies are usually swept by rich individuals with dubious reputations. He said they “invest financial, physical and criminal resources in bullying and bribing voters.”